My wife is gone back to Europe — Patapaa denies divorce rumours 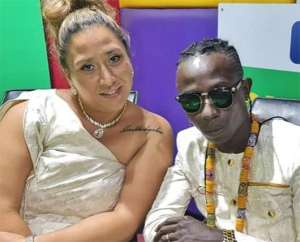 'One Corner' hitmaker, Patapaa has debunked reports that he has divorced his German wife, Liha Miller.

He told Cape Coast-based Kastle FM, his wife, Liha Miller, has traveled back to Europe to work.

“You know that my wife is a white woman from Europe but not permanently based in Ghana and besides she's a nurse.

So, she has gone back to make more money abroad and I'm also making money here in Ghana that's why you've not been seeing her these days,” he said.

Patapaa and Liha got married on Saturday, January 2, 2021. Before their marriage, the two used to wow their followers with their public display of love. Interestingly after their marriage that seemed to have stopped as they no longer put their love for each other on display.

Early weeks reports alleged that all is not well with the couple.

They have not been seeing each other for several months now because they have allegedly separated.

Liha Miller has allegedly been staying in Nigeria for over four months, where she has been shooting skits and also enjoying herself in nightclubs out there.

In Patapaa's father, Kwesi Amoah denial of the divorce in an interview with Adomonline confirmed that they were separated.

However Patapaa says they are still married just that his wife has gone back to work, indicating his wife is a supportive woman.

“She's a nurse abroad, you know that white people don't joke with their work so she has gone back to Europe after we got married last year.

“She's a very intelligent, brilliant and hardworking woman that's why I thank God always for giving me such an amazing wife,” Patapaa added.