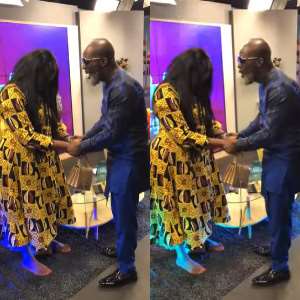 The two met yesterday when the latter was invited for an interview with Mona Gucci on her show, ‘Biribi Gyegye Wo’.

Prophet Kumchacha’s action comes after Abena Korkor over the past couple of weeks was at the center of most controversies on social media including sharing her naked videos.

The man of God however believes that the socialite’s deeds are all a result of the devil’s hand in her life hence the decision to pray for her.

Kumchacha however indicated that he has always blamed the devil instead of putting the blame on her mental issues as widely circulated.

“If there are no issues it should not have gotten to this point. In the beginning, I thought it was deliberate but I have conducted my investigations and prayed about it. It is not deliberate but it’s something haunting her,” he said.