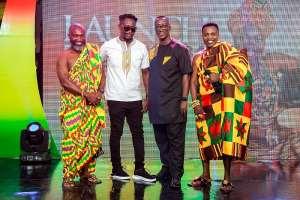 The most anticipated cultural bazaar to hit Accra, Akwaaba Festival is set to kick off on August 4 to 6, 2022.

The festival was officially launched at an eventful ceremony at the National Theatre in Accra on May 18, 2022.

Marked with a touch of tradition, talent and snippets of what is to be expected at the main event, the launch ceremony was honored by some personalities who have a great interest in culture and tourism including, Dada KD, Akumaa Mama Zimbi and the legendary musician Gyedu Blay Ambolley.

‘24th December’ hitmaker, Kaakyire Kwame Appiah, now the Benkumhene of Bosomtwe Asaman in the Ashanti Region was there in full regalia.

The Akwaaba Festival seeks to project the beautiful and diverse Ghanaian culture and tradition uniquely.

During the 3 day event, participants will be entreated to various aspects of Ghanaian culture ranging from food, clothes, artifacts, and many others.

Speaking at the event, the Administrator/ Project Director of the event, Mr. Joe Osae urged the media to rally behind the initiative adding that it seeks to project a good course.

He further asked the media to act as an advocate for pushing the Ghanaian tourism agenda.

Giving the keynote address on the behalf of the Minister for Tourism, Arts and Culture was Professor Godfred Eshun who urged the general public to believe in what the festival seeks to achieve as far as culture, tourism, and national development is concerned.

He said although the festival has started little, its objectives indicate that it will be a massive success soon.

Prof. Eshun added that stakeholders in the tourism sector must eschew mediocrity and throw their maximum support behind the initiative.

Meeting the media after the launch, Mr. Joe Osae expressed that the annual event which will be powered by Ceejay Multimedia will throw more light on the rich culture and tradition of Ghana with some support from the Tourism Ministry.

He said the Akwaaba portrait which became the country’s hospitality symbol across the globe continues to serve its purpose.

“The Akwaaba portrait has been an inspiration all over the world so trying to get people to like the Akwaaba Festival isn’t too much of a big thing. We have the portrait and we now want to have the festival. We spoke with the tourism ministry and they want to support us.

"You should expect something big and different because we are bringing the whole of Ghana under one roof; our heritage, our culture on 6th August at the National Theatre. We are going to give you the best of all so Ghana has to be prepared,” Mr. Osae said.

Participants will be entreated to three days of well–planned and culture-themed activities including; a mini-fair, which will include a food bazaar, and an arts and crafts display.

Stage performances were cultural dances like Agbadza, Kete, Adowa, and other dances from other ethnic groups.

A documentary, ‘How Ghanaian Music Has Evolved Over The Years’ by Dr. Ben Amakye – Boateng of the Department of Music, School of Performing Arts will be displayed.

Comedy and Drama night will follow shortly afterward with some acrobatic displays.

There will be short speeches by representatives of the government and Akwaaba Festival event organizers.

‘Miss Akwaaba Fest 22 will be the penultimate item on the list of activities where young girls with eloquence and in-depth knowledge of their various cultural heritages will compete in full light (auditions will be held earlier).

The Highlife Time show will crown it all up with performances from industry greats; participants will be entreated to endless authentic Ghanaian music.

Guest artists are yet to be announced.

Hottest Photo Reports
Catch up with all the political quotes from our politicians.
Advertise here
More from Art & Culture
ModernGhana Links
Celebrities must be ambassadors of Ghanaian tourism — Okraku Mantey
Have more confidence in indigenous products - Mark Okraku Mantey
'Sticking to rich Ghanaian culture has made me relevant in the music industry' — Okyeame Kwame
TOP STORIES