Yvonne Nelson's 2015 'dumsor' demo, vigil was needless; she should do same against E-levy — John Dumelo 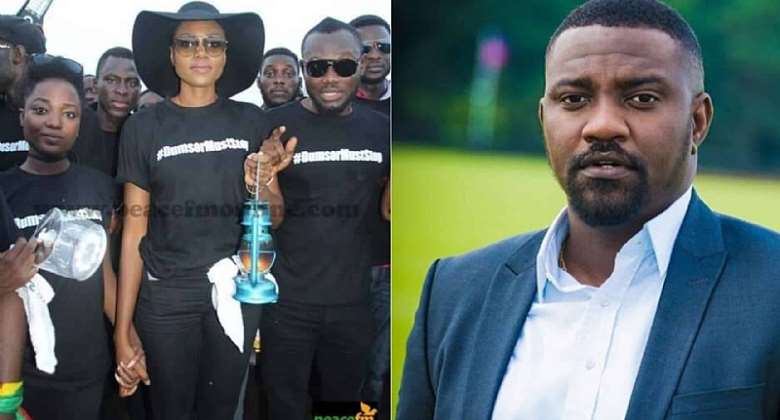 In a recent interview on Adom TV’s Ahosepe Xtra show, the actor stated that the actress’ demonstration came at a time when the then president John Dramani Mahama had promised to solve the situation.

“I don’t think it was necessary. At that time the president has promised to fix the problem and before he left, he fixed it. Then Yvonne went ahead with her demonstration. I’m sure that people were fed up and needed some form of action.

"President Mahama said he will fix the issue, fixing is not a one-day thing and so I will not fault anyone, but you should have given him the due credit for solving it,” he said.

In the same vein, he asks Yvonne Nelson to also lead another demonstration against the current government over the controversial E-Levy and the current hardship in the country.

“They have to do another demonstration for the E Levy. I paid 5,000 cedis and paid almost 70 something cedis. If I am to send that amount every day, imagine how much money I will have to pay as E Levy.

"We can do the demo, but the people in power won’t listen, unlike John Mahama. We can walk naked to Agbogbloshie and nothing will happen,” he stated.

His actions come after the actress together with some industry giants took to the streets of Accra due to the persistent power cuts in 2015 during the tenure of the NDC under John Dramani Mahama.

Franklin Cudjoe back calls for probe into Covid-19 expenditu...
37 minutes ago

North East: One killed in clash between two communities
37 minutes ago