We will grow together; please are you dating? — Shatta Wale tries to woo Serwaa Amihere 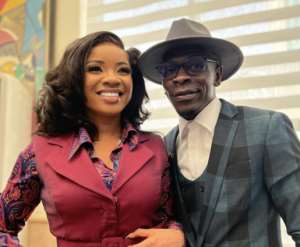 In a recent post on Instagram, the father of two target his shot at the TV Presenter when he posted a picture of her, indicating that she was strong and hard working.

"I wish I had a wife like this, hard-working and strong in my line of business so we grow together @serwaaamihere .. pls are you dating".

The TV Presenter reacted to the post by dropping laughing emojis.

The self-acclaimed Dancehall King is recalled to have parted ways with his long-term sweetheart, Shatta Michy.

Social media was thrown into a state of shock when the two announced that they were going separate ways in 2019.

Until recently, Shatta Wale introduced one Elfreda as his new girlfriend but that also didn't go anywhere as the artist in a series of posts announced their fallout.