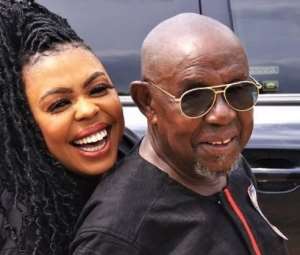 Socialite Afia Schwarzenegger has made a shocking revelation about the death of her father.

In a recent interview, she revealed how several attempts to end her father’s pain all proved futile and how eating was a problem for him.

“Sometime in January, we were all praying to God to come for my father. Oh yes, the kind of pain my father was going through. Morphine couldn’t cool the pain. There’s no painkiller. No medicine was working. My father wasn’t speaking, eating, or drinking water. What was he lying there for? Suffering!” she said.

She added that her father’s demise hit her hard but she had to be strong enough to make her children and followers on social media happy.

Afia indicated she had to hide her grief just to make appearances on social media.

“My father was lying down crying. He knew he was dying. I grieved my father before he died. And I’m still grieving my father. But I’m also trying to live for my children.

"I can’t go to work and sit down and cry. What people seem not to know is social media is my working field. I cry, clean my face and come and make videos,” she stated.

The controversial socialite added that she nearly lost her mind in the latter part of her late father’s situation adding that she returned from a trip to find him in a worse situation.

“I traveled sometime in September when I came back it looked as if I had left my father for 12 years. And when we went to the hospital, the doctors said medicine has ended. And from that time to January, I grieved,” Afia Schwarzenegger told ZionFelix.

Deaf Association calls for deaf-friendly curriculum for deaf...
3 minutes ago

‘Something is wrong somewhere’ — Otumfuo wonders why galamse...
3 minutes ago