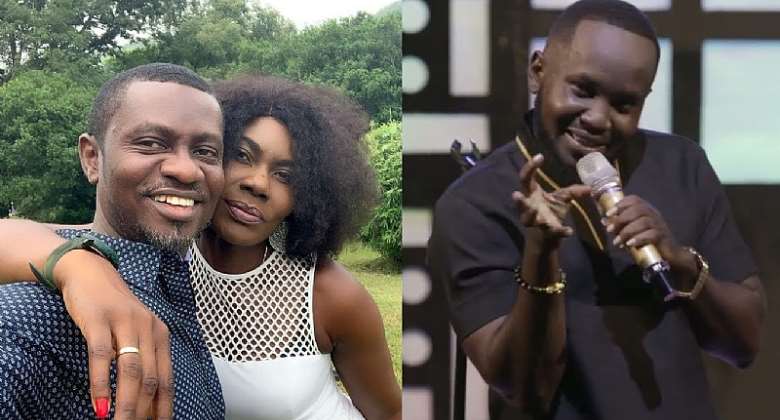 The wife of ace broadcaster of Multimedia, Israel Laryea is not happy with comedian OB Amponsah following a joke he made about her husband.

OB Amponsah mentioned that the employers of Israel Laryea had paid him well because in sharing his experience, he mentioned that he was isolated in his boys' quarters.

Mrs. Louisa Laryea, who appeared ungappy with the joke called the comedian stupid and miserable.

In a Facebook post, Mrs. Laryea cautioned the comedian to be mindful of an impending “Will Smith moment beckons if he stays his nonsensical course”.

“There’s a very STUPID miserable local comedian so-called by name #OB_Amponsah. Obviously, another badly brought up child. Misbehaving all over the place in the name of comedy,” she wrote.

Shortly afterward, OB Amponsah made a post on his Facebook indicating that Mrs. Louisa Laryea had called him on phone to verbally attack him.

“Louisa Laryea called me on phone to berate me for making this observation about her hubby Israel Laryea during my Popular But Broke set. She’s also taken to her Facebook wall to call me names and claims she will go Will Smith on me next time she sees me.

"I’m befuddled at how she understood this simple observation. Have you spoken to your husband about this pointless course you are on, Louisa?” he stated in his post.

Hottest Photo Reports
Catch up with all the political quotes from our politicians.
Advertise here
More from Comedy News
ModernGhana Links
Comedians are not fools; they are smart, intelligent and creative — MJ the Comedian
Noire Comedy uncensored set to hold on April 30
'Refrain from making jokes about people's disabilities' - Fritz Baffuor advises comedians
TOP STORIES