CMIYC: AG Affirms Status As One Of Africa's Most Innovative Artists. 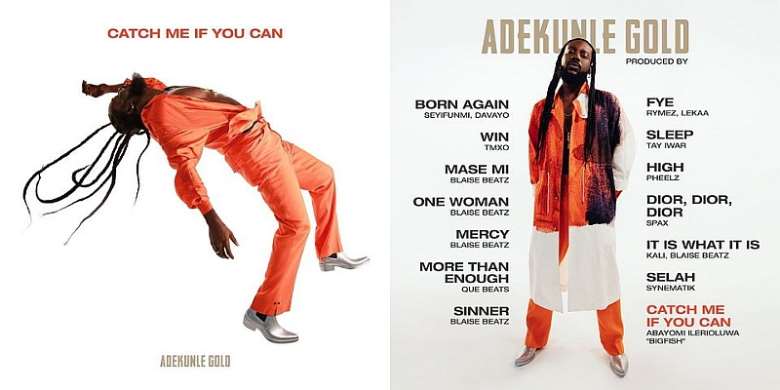 Adekunle Gold, the former Nigerian king of photoshop and now one of the most vibrant music artists in Africa is in cloud nine right now. Days after celebrating his birthday, he also churned out his fourth studio album “Catch Me If You Can,” to a commercial success.

The project is a cementation of Adekunle Gold's transition to full-fledged Afrobeats artists' last album “Afro Pop Vol 1,” was an experimentation which birthed some lovely tracks, attention and accolades.

With CMIYC, Adekunle Gold stands on a solid platform, his typical astute penmanship comes to play while for the first time, he is confident in his songs, says what he feels like, and even uses some lewd line when he feels it's necessary.

The opener welcomes the listener to the creative shift. “I have been living for people but me,” he says. It's a self-confident enhanced track and in some way snapshots of what he has been through in the last two years. He has a kid. Fatoumata Diawara's lush vocals come to his aid.

AG exudes confidence and positive affirmation on “Win,” and “Mase Mi.”( with a saxophone underneath). These run through a large chunk of the tracks.

Simi and Adejare are hismusesse on this album, he dedicated a track to the former; on “One Woman,” he co-opts the USA rapper TY Dollar Sign for a melodious and strings-filled track with an homage to theIgboo soup Ofesala. When you hear me and my woman, AG should come to mind.

Adekunle Gold's broadened sonic palette remained one of his unique selling points even after ditching Highlife and Juju to go mainstream, he still took some steps back to these genres. “Mercy,” retains some element of Galala with an obvious homage to Baba Frayo's classic record “Denge Pose”—I hope the recuperating artist gets some royalty off this song. The highlife spiced “More Than Enough”, is a slow burner that reached its crescendo when the trumpet collided with the drums.

“Sinner,” and “FYE,” share similar themes. The placing on this album makes a seamless transition. Love into copulation or in the reverse order.

When AG goes the emo way on “Sleep,” you just know something was not right. He struggles, not even his vocal flirtation could help him.

For a guy who started by serenading his better half with lovely tunes and at some point claimed she doesn't care if he had money (Orente), there was an obvious change of narrative via the Davido assisted “High.” The first three; 🎶 lines /Love is not enough/Baby come to me, Molowo/(come to me, Molowo) 🎶 was an eye-opener. It currently has 10 million streams on Spotify—his highest ever.

Even though he claimed Money doesn't bring happiness on “It Is What It Is,” he was quick to pray for others to have money apparently to prove or affirm his claim.

What's Adekunle Gold's album without a track for his ex? From Nurse Alabere (Gold) to Damn, Delilah(About 30), My Ex (Afro Pop), AG always has this penchant for striking something for his ex-girlfriends. It ranges from acerbic to sweet talk and half pleading. He continued that streak with the percussion-driven “Selah”. The eponymous track ends with a voice note from one of his close pals, signaling what to expect in his artistic trajectory.

CMIYC is a stark, distinctive artistic rebirth of AG baby and a further affirmation of his status as one of the African most innovative artists.

Your plan to buy oil with gold instead of USD bogus; you're ...
31 minutes ago