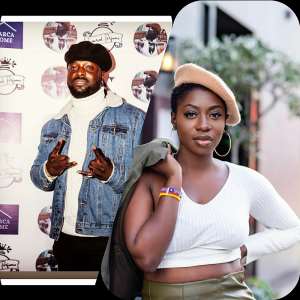 Danny Lampo is a household name in the UK. If you are a music lover in the UK the name Danny Lampo won't be new to you.

Danny Lampo had his breakthrough to mainstream after dropping his most talked about single “Ebony” which topped so many chart across the globe.

In a recent post that showed Danny Lampo having fun in a video with his girlfriend who goes by the name Adwoa. It is said the lady in question is also living in the UK.

Many people were actually wondering who the superstar was going out with. The surfacing of this video on the internet has got many talking and asking equation if she is Mrs right, or we should look out for someone else.

For the meantime, have a look at the pictures of the said lady and leave your feedback below.

Latest Photo Reports
Catch up with all the political quotes from our politicians.
Advertise here
More Industry News
ModernGhana Links
Arnold Schwarzenegger involved in Los Angeles car accident
We are no match to Naija musically – Kin Frenzee
Naf Kassi who hails from Bogoso console victims of tragic explosive
Nana Ampadu's death depicts Ghana's music industry has no future — Joseph Matthew
2021 AFCON: 'Clap for yourselves from coach to players, this is a shame' — Sonnie Badu react to Black Stars exit
Worsening conditions of old actors very worrying — Actors Guild
Nominations open for 2022 Vodafone Ghana Music Awards
“Our royalty system must work properly”—Stonebwoy to GHAMRO
Kobina Ansah is back to sue God this march after having an emergency wedding
TOP STORIES