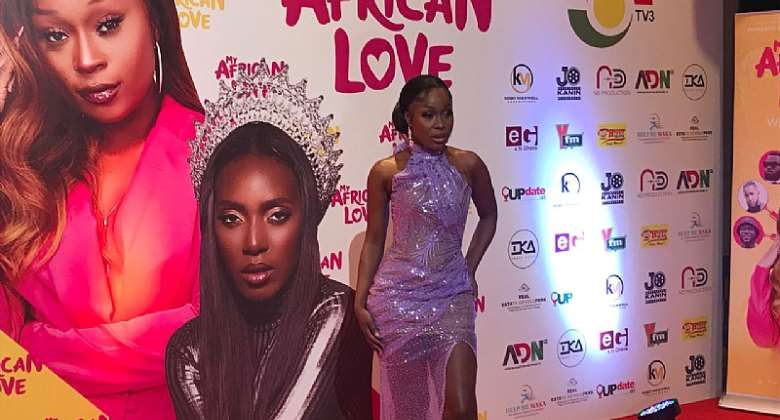 The TV Show features Andrea Owusu, popularly known as Efia Odo as she experiments with 15 men at a huge mansion in her quest to find her one true love.

Several weeks after the official trailer of the Reality Show was released, My African Love with Efia Odo has finally hit the cinema.

On Sunday, December 19, 2021, the first three episodes of the one-of-a-kind TV Show was premiered at the Snap Cinema in Accra with a good audience.

Speaking to Journalists on the sidelines of the Premier on Sunday, Producer Koby Maxwell expressed delight at the reception and turn-out for the first three episodes.

Koby Maxwell confirmed that the Premiering of the Reality TV Show will continue from today, Monday, December 20, to Saturday, December 25, 2021,

Ghanaians that missed the Sunday show can troop to the Snap Cinema today to catch the first three episodes.

Tickets are going for a cool GHS50 and GHS200 for one and all four shows respectively.

You can grab a ticket at ETV Ghana, Foto store inside Palace Mall and Accra Mall, YFM at the Accra Mall, Airport Shell, Baatsona Total at Spintex, UPSA, Zenith University, as well as the TM Garage at Tema Comm. 10.

More about My Africa Love with Efia Odo:

My African Love with Efia Odo features actors and actresses from Ghana and other countries in Africa with producers pulled from Hollywood, Bollywood, and other parts of the world.

Household name, Chris Attoh, is the amazing presenter along with a host of others given an ecstatic feature on the show.

The series is unlike any popular Hollywood love story. It dabbles in a rather unconventional twist in a lady's quest to find love amidst betrayals and heartbreaks.

The TV Series is the first African reality show that has been shot in the diaspora. It has 10 episodes in the first season with a duration of between 30 to 40 minutes in each episode.