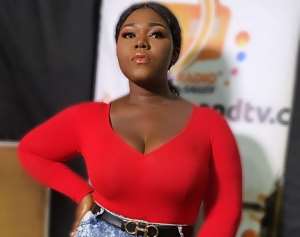 Actress and TV Host Nana Yaa Danso has revealed how she got attached to a movie producer she loved.

The actress went ahead to tell how she visited him severally to wash, clean and cook for him.

In an interview with a Ghanaian blogger and host of "Vibes With Jibriel" on Y3 Kasa TV, the talented actress stated that she had some mutual feelings for the producer but never expressed it to him.

Nana Yaa Danso said she believes the movie producer didn't realize her feelings for him because she tried to hide it so he doesn't take advantage of her.

"Yes, there was a time I really liked one particular producer paaaaa and I used to go wash and cook for him. But I could not tell him. I was working with him and I really liked him but we never took things seriously because we worked together and we did not mix work with relationships. He is now married and I am happy for him," she stated.

Miss Nana Yaa Danso has been in the movie industry for some years now and has been featured in big movies including "Side Chic Gang" produced by Peter Sedufia.

Watch the full video below;

In other news, television personality and actress, Haillie Sumney , has backlashed celebrities who come on social media to fight and insult each other.

She believes if people have issues, they should settle them off social media and not rant over issues on social media.