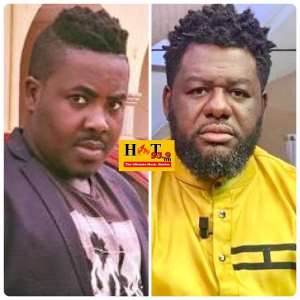 They mentioned award-winning singer King Promise and applauded his efforts after performing excellently at Wizkid's Made In Lagos Concert.

They also thanked Wizkid for giving a Ghanaian the opportunity to show his craft. Nana Ama Mcbrown also mentioned Stonebwoy’s spectacular performance at the O2 Indigo and asked the opinions of his pundits.

Manager of Shatta Wale, Lawrence Asiamah Hansen aka Bulldog who was one of the pundits made some submissions that suggested he was not really on good terms with the 'Hero' hitmaker.

While other pundits on the show A Plus, and Arnold Asamoah Baidoo together with the host Nana Ama Mcbrown agreed that the dancehall musician did great, Bulldog said there was nothing to celebrate.

His words did not sit well with A Plus who countered Bulldog saying Shatta Wale is yet to achieve such feet.

However, another ardent manager who seems not to be pleased with Bulldog's utterances on the show against Stonebwoy happens to be the current manager of celebrated Kumawood actor Kojo Nkansah better known as Lil Win, Ray Moni.

In a facebook post sighted by Hotfmghana.com, Ray Moni after sharing a photo together with Lil Win wrote:

"Pride, anger and hatred are fruits from the same garden that poison the world when ripe. a leader doesn't cultivate such fruits."

Ray's post has created elephantine controversy on social media as it's being linked to Bulldog's submission against Stonebwoy.

All attempts by Hotfmghana.com to reach Ray Moni who is the former manager of celebrated rapper, Guru to ascertain the truth of the matter proved unproductive.

Well, read Ray's post below and be the judge.