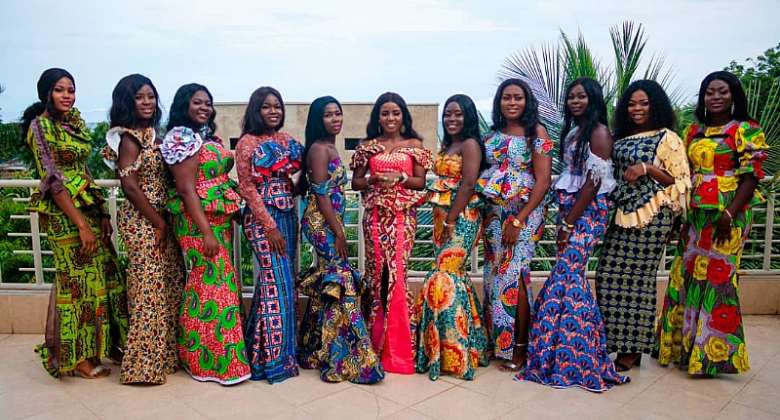 The second edition of Naa GaDangme brought to you by Agidor event Services and Tv Africa is currently ongoing with 11 contestants selected across the various Ga and Dangme towns.

The various traditional councils after selection held grand traditional durbars to send off their representatives into the house were they are being camped for the competition.

Ningo’s representative however could not make it to the house due to personal reasons.

The second edition was launched in the 2ofnOctober with a beautiful display of tradition and followed with wonderful performances on History of the vairous Towns, Festivals, fashion show and Customary practices.

Over the past few weeks that the show began, two contestants representing Kpone and GaMashi have been evicted due to votes and performance.

The CEO of Agidor Events on behalf of the organisers, Madam Dorcas Naa Atswei Koney stated that evictions will continue till 4th of December where the remaining five contestants will battle it out on the grand finale stage. “It is on this day that we will all know who takes over the crown from Naa Ayele Charway, our 2020 reigning queen” she said.

Latest Photo Reports
Catch up with all the political quotes from our politicians.
Advertise here
More Coming Events
ModernGhana Links
Bayview Village to host Wendy Shay for Heat Rave concert on Saturday
Viewers Choice Awards comes off today
Westside London Hills to honour celebs from western region
Ferty Felix Nominated For Best Blogger Of The Year At Glam Style Awards
Danny Lampo to perform at the biggest afrobeat party in UK with Okese1
Ghanaian creative talent leading the fight against malaria with launch of ‘The Underestimated Villain’ film
Anticipations rise as Latif Abubakar's play 'Something Must Kill A Man' is set to stage in 7 days
Miss Malaika 21: Who makes it to final 20 as voting codes released
Audition, launch of Mister Model Ghana set for Saturday
TOP STORIES