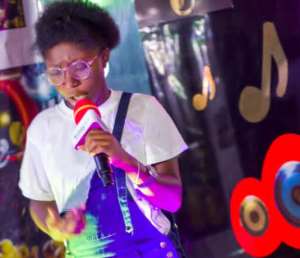 A former student of Yaa Asantewaa Girls' Senior High School (YAGSHS) in Kumasi in the Ashanti Region, Janice Ohemaa Amoah aka Queen Jern has joined in the fray to contest a reality show competition organized by a Kumasi-based Trinity Television outfit.

The show is aimed at encouraging and promoting young musicians (rappers) to develop their talents in the music industry.

According to source close to the organizers of the show which is dubbed 'GH- Heroes'- My Time is Now,' started in October 16 and would end in December 25th 2021 where award winners would be given special prizes in addition to a tour in Dubai.

Queen Jern said she was inspired by the works of popular celebrities who are using music to make an impact in society.

Queen Jern, an enterprising upcoming rapper indicated that though she has gained admission to pursue nursing in one of the country's Nurses and Midwifery Training Colleges next year, she finds music as another noble profession, hence her desire to contest and win the competition to add to her future profile.

Queen Jern noted that musicians can be used to transform the society, therefore her interest to enter into the rap music industry to become one of the celebrities.

Queen Jern who was impressed by her numerous fans during her Saturday live performance on the Trinity Television is therefore, passionately appealing to the general public to massively vote her by dialing *447* 714# and then enter nominee's code BC 12 to enhance her winning chances in the competition.

Latest Photo Reports
Catch up with all the political quotes from our politicians.
Advertise here
More from Art & Culture
ModernGhana Links
Oh Ghana- Why doesn't our land reflect us?
Painting Kumerica: The Evolving Artistry Of Dankyi Mensah
Annual Akwaaba Festival '22 set to kick off on August 4 to 6
TOP STORIES