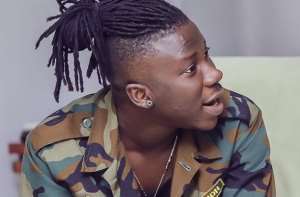 The award-winning musician of international repute is using music to draw attention to the illegal mining menace as well as the destruction of the environment.

In the song, Stonebwoy speaks on the economic loss, greater loss of life and property, poisoning of soil and groundwater, biodiversity loss, chemical leakages, and other long-term negative repercussions the activity is having on the country.

He also mentions how foreign companies engage in illegal gold mining in Ghana in their quest for riches at the detriment of the local people.

Speaking to Bernard Avle on the The Point of View on Citi TV, Stonebwoy said as a concerned citizen, he thought it wise to add his voice to the fight against illegal mining which is endangering the lives of other people.

“It [the scourge of galamsey] hit me especially when I did the Boss Energy tour when I went all the way to Bawku. When I saw certain things, I was really touched. And I said to myself I sung Run Go and all the other conscious songs but this would be another time to put this one also onto a record and speak about it because it's affecting society,” he said.

This is not the only social responsibility project the Bhim Nation president has embarked on.

On 10th July, 2020, under the auspices of the Livingstone Foundation, he organized a skills training workshop for some people of Ashaiman who wanted to learn skills to equip them to become entrepreneurs.

He has also in the past, championed causes such as the one house, one toilet project at Ashaiman and made donations to the underprivileged.

He has other songs such as 'Run Go', 'Suit and Tie', 'Tomorrow', among others.

Stonebwoy, will from November 21, 2021, embark his Anloga Junction UK Tour.

Latest Photo Reports
Catch up with all the political quotes from our politicians.
Advertise here
More from General News
ModernGhana Links
Akufo-Addo fooled, deceived us that he's rich and not in for our money yet all our money is in his pocket - Oboy Siki
I need security now - Kwame Dadzie fears being ambushed as people refer to him as carbon copy of ‘controversial’ A Plus’
Freedom is an illusion, if you want to chill for free, remain in the fridge — Bulldog
TOP STORIES

Akufo-Addo angry, dissatisfied over slow pace of work on Bol...
48 minutes ago