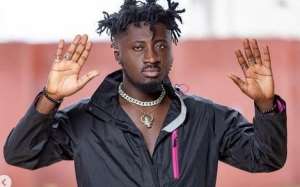 Over the past few years, Amerado has gradually won the heart of many Ghanaians as he has become of the trusted and most love rappers in the country following his recent ‘Ye Te Ns3m’ news show.

He said the only thing he takes is coke and malt.

Explaining why his mother was advising parents on what their children want to do in life, he said his mother never support his music career growing up because she thought should become a weed smoker or an alcoholic.

According to Amerado, his mother thought he'll become a rascal but he told his mother to allow him to do music and see if he won't glorify her name.

He said that has been the reason why he's never smoked or taken alcohol before.

The MicBurnerz and New Nation Music crooner is set to gain global recognition with this EP as it currently sits number one on the Apple Music chart.