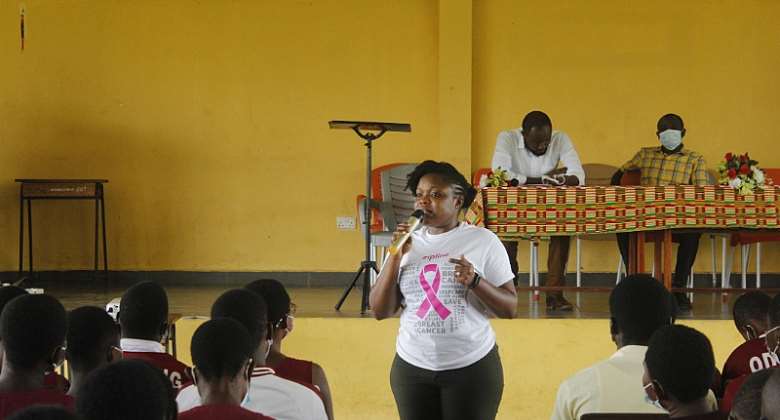 The event, organized in commemoration of the Breast Cancer Awareness month of October, was to highlight the symptoms of Breast Cancer and champion a campaign for early detection and treatment.

Speaking at the event, the Principal Health Officer of the Awutu Senya East Health Directorate, Madam Veronica Amoako said the prevalence of breast cancer among adolescents is an issue of concern for health authorities in the country and therefore the need to undertake sensitization programmes that explains the symptoms.

Mad. Veronica Amoako stressed that breast cancer, like all other cancers, can be managed and not cured and therefore admonished people, especially, women to periodically undertake self-examination to check out sores in the breast and other observable symptoms to know if they are at risk of breast screening.

“Each one of us should make the effort at getting to know the symptoms of breast cancer and also ensure we regularly self-examine just so we are sure of the safety of our breasts. Early detection saves and so you must elect yourself to have self-examination from time to time”, she said.

Globally Breast cancer has been identified as the leading cancer for women and occupies the spot as the second cause of female cancer deaths in the world. Aside the high cost of treatment, the pain can be nauseating. The World Health Organization, in a recent finding, suggests that over 2000 women have breast cancer annually of which about 1000 die and thus called for more action to reduce the occurrence.

The Principal Health Officer of the Awutu Senya East Health Directorate also engaged the students in teenage pregnancy prevention. She stressed abstinence as a surest way to avert such situations. She added that unplanned pregnancy, especially for adolescents has the tendency of threatening the academic progress of students and leads to several social vice.

On her part, Mrs. Shemau Muniru, the Community Lead of Zipline Omenako said, the health status and academic progression of the youth is at the core of the business ethos of Zipline. She stressed that it is the unwavering dream of the company to see the youth healthy enough to shape the development of the future. She therefore called on the students to eschew indiscipline and desist from engaging in pre-marital sex that has the proclivity of stalling their progress.

A total of 150 students were screened with a number of others being referred for further examination.