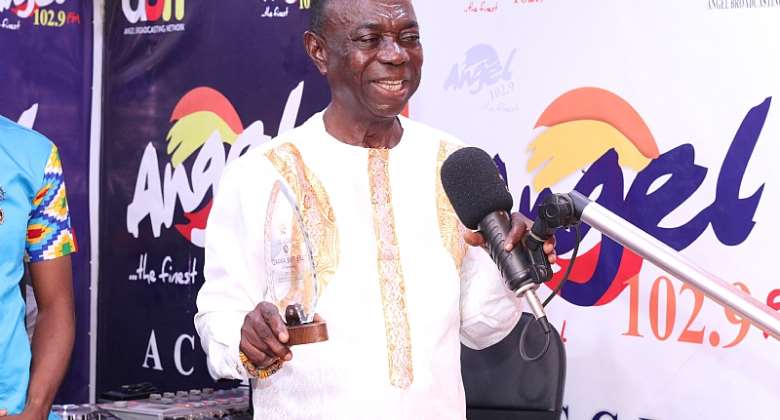 Elder Sam Cooper has been honoured a lifetime of awards for his emergence in Gospel music performances.

Elder Sam Cooper has produced most of the Christian prayer songs which have had a great impact on the Ghanaian Christian body.

Upon receiving this award, the "Maranatha" album maker registered his excitement, fulfilment and gratitude to the award organizers for recognizing his works.

"I am so happy to be honored today. Even though it has never been my priority to receive earthly awards but it's a fulfilment when the world recognizes your good works and appreciates them. I have been performing gospel music for over 40years now and this is my first ever award. I thank God for today," he said.

He continued, "I thank Kofi Adomah Nwanwani for the exposure. It was through him that many got to know more about the songs I have composed and performed."

NAGA awards is scheduled for October 16,2021 at Sowutuom in the Greater Accra Region.

The award scheme aimed at empowering the youth in gospel music.

On the night, the scheme will award both legendary and contemporary gospel singers.

According to the organizers, they seek to draw a line of unity and mentorship between the old and new gospel singers.

They, therefore, called on all and sundry to come and witness the moment of greatness and glorification.

Hottest Photo Reports
Catch up with all the political quotes from our politicians.
Advertise here
More Gospel News
ModernGhana Links
Any challenger? Joseph Matthew makes history with 'The Name' music video
I don't have a pen and a book to write my songs - Obaapa Christy
Fredima names Joseph Matthew as new 'king' of afro gospel music
Gospel act MiQ B resurfaces with 'All The Glory' hit song
Our ministry was revealed to us through a prophet – Tagoe Sisters
Tagoe Sisters disclose how they learnt how to sing
Bernice Ansah urges gospel musicians to be peace ambassadors
Gospel Musician Sister Seraphine set to drop visuals for 'Choose'
2021 GUGMA: Jayana grabs Contemporary Artiste and song of the year awards
TOP STORIES