Rapper Medikal reveals where he met his wife Fela Makafui 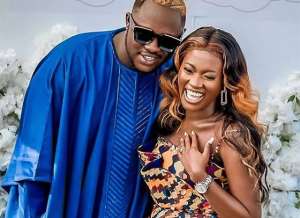 Rapper AMG Medikal has revealed how he met his wife actress Fela Makafui.

According to the award-winning rapper, he met her on Facebook and they both became good friends until they went to court for a while on the blind side of many Ghanaians.

He stated that their union had a very tough beginning as he recalled a few instances they both lost contacts hence placing an embargo on their communications.

Medikal added that his quest to settle with just a woman motivated his decision to marry Fela Makafui.

He expressed that he feared getting swayed by several women due to his affiliation with the showbiz industry but he was bent on having a beautiful family and a nice wife but admitted that he was against any industry with a polygamous lifestyle.

Currently, parents of one, Medikal and Fela Makafui tied the knot last year amidst several controversies which surrounded their union.

Hottest Photo Reports
Catch up with all the political quotes from our politicians.
Advertise here
More Couples/Break-ups
ModernGhana Links
Ayawaso North NPP Chairman ties the knot​ in Accra
I'm a man — Nollywood actor Yul Edochie replies critics over second wife wahala
I'm not bothered about women around my husband after 15 years of marriage — Wife of Adjetey Anang
I thought I could change my husband because he was a pastor — Gospel singer Agnes Opoku Agyemang opens up on marital abuse
"I was on set" — Mercy Johnson opens up on absence at Rita Dominic's traditional wedding ceremony
LAPD arrests Rihanna's baby daddy Asap Rocky over gunshot incident
I was always deprived of sex — Xandy Karmel reveals more about her broken marriage
I lost four children to miscarriages in my abusive marriage — Xandy Kamel reveals
Funny Face's ex wife welcomes baby [Photos]
TOP STORIES