'What!!' — Ghana High Commissioner to UK left in shock after Stonebwoy tells him what he gets as royalties from GHAMRO 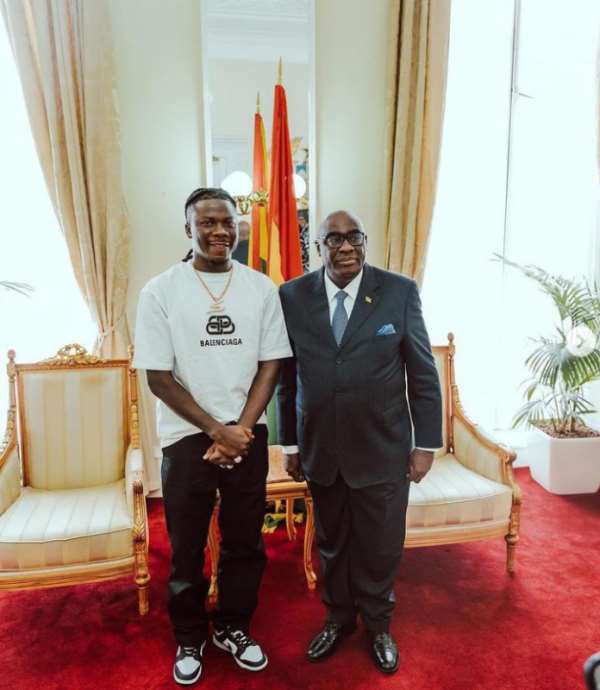 Ghanaian musician, Stonebwoy has had a heartfelt conversation with Papa Owusu-Ankomah.

The popular musician shocked Ghana’s High Commissioner to the United Kingdom during their conversation.

The Burniton Music Group boss was talking about the royalties musicians in the country receive from the Ghana Music Rights Organization (GHAMRO).

After Stonebwoy revealed GHS 2,000 as the highest amount he has received as royalties in a video ModernGhana News has obtained, Papa Owusu shockingly shouted, “What?”

He added that Stonebwoy’s songs are played every minute and almost everywhere.

Stonebwoy further stated that he has visited GHAMRO with his lawyers but nothing positive has come out from that.

Hottest Photo Reports
Catch up with all the political quotes from our politicians.
Advertise here
More Exclusive News
ModernGhana Links
A short man? No; my man should be tall – MzVee
WATCH: Shatta Wale, Medikal run to the beach for 'spiritual' cleansing after bail
See Fella Makafui’s reaction after Medikal was granted bail (+VIDEO)
The Lioness Roars in Dubai at The All Africa Festival 2021
‘Funny Face is possessed’; let’s pray for his spiritual deliverance' — Don Little
My haters have become my fans – Wendy Shay brags after release of ‘Heat’
Otabil condemns doom prophecies, 'it is dragging Christianity back'
Rest in jail you junkie bwoy – Blakk Rasta rekindles old beef with Shatta Wale
[Hot Video] Shatta Wale vim dies as prisoners hoot at him inside Ankaful Prison
TOP STORIES