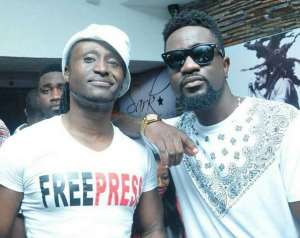 Hiplife Legend, Reggie Rockstone says Ghanaians should stop lambasting rapper Sarkodie over his recent comments during an interview on a Nigerian radio station while promoting his new album dubbed 'No Pressure' in Nigeria.

Sarkodie, on his new album, featured top-notch African musicians and has been on media tour.

A host on the radio purported that Ghanaians don't appreciate Sarkodie for his hard work and music achievements and that the multi-awarded rapper should be well celebrated.

In response, the Highest, King Sark told the presenter that he was speechless and asked for the interview to trend - to say he supports the assertions by the presenter.

Some critics slammed him saying he is ungrateful.

Entertainment Journalist, Arnold Asamoah Baidoo, discussing the issue on UTV's ''United Showbiz'', insisted that Ghanaians have hugely supported and appreciated Sarkodie but rather it is Sarkodie who is not giving Ghanaians credit.

In an interview on ''Entertainment Review'' on Peace FM, Reggie Rockstone, the originator of Ghana's Hiplife music genre, has asked Ghanaians to give Sarkodie a break.

According to him, Sarkodie is hoisting the flag of Ghana and therefore doesn't deserve the negative criticisms.

"As we speak right now, he is moving from coast to coast holding the Ghanaian flag. Let's just be supportive, patriotic," told host Halifax Ansah Addo.

Reggie Rockstone asserted that "the reason why we're being so defensive is that we have a guilty complex''.