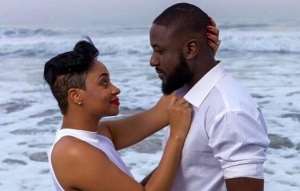 Ghanaian celebrity tailor, Elikem Kumordzie, has asked his ex-wife, Zimbabwean socialite, Pokello Nare, to forgive him after their failed marriage.

In his latest post on Instagram to wish her a happy birthday on August 24, Mr Kumordzie admitted he slacked, adding that, he is so sorry for not holding their union tight when it mattered the most.

"I’d like to seize the opportunity to render an apology to you for not consciously holding us down. I slacked a lot and I’m sorry," he stated.

According to him, he finds himself swimming in joy anytime he sets his eyes on the son they had together.

"When I look at my son I get so much joy and I want to say a Big thank you for taking good care of him also. I know I owe you a few months maintenance money the building is almost done".

"I think you’ve forgiven me already, otherwise you won’t be so nice with me, But if there’s any spec left, please find a way to remove. Bless you and enjoy your day I’ll post a music video of a song I made for you six years ago," he wrote.

Another thing that caught the attention of many were the words attached to the photo he shared which were: By all means marry; if you get a good wife, you will be happy; If you get a bad wife you will become a philosopher.

The ex-reality stars met during Season 8 of Big Brother Africa (The Chase) in 2013.

In 2014, he proposed to her on the stage of Vodafone Ghana Music Awards when they were called to present an award and subsequently they got married in June 2015, in a close ceremony in Zimbabwe, her hometown.

But less than two years after they tied the knot, their marriage hit the rocks.