Asakaa From ‘Kumerica’ To London 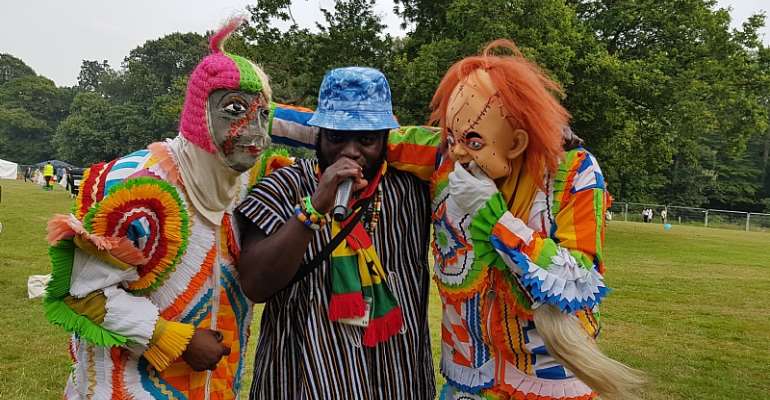 On Saturday 24th of July 2021, Trent Park in London Cockfosters opened its vast landscape to welcome Yaw Tog, Kwaku Flick, Kwabena Kwabena and many others to this year’s Ghana Party in The Park.

While some patrons were waiting in anticipation to catch a flavour of the main stage and its numerous actions; others were feasting their hungry eyes on the assorted cuisine of the day.

It all started as a joke to some, and to many critics, it was a certain fad, that would eventually not see the life and delight of any given daybreak.

But lo and behold, through the nooks and crannies of things, ‘Kumerica’ as a movement and Asakaa as a music genre have both resisted the pressures of other music genres in Ghana.

Not even the pandemic could hold down the musical energy emanating and roving across from Ghana to Europe and The UK to be specific.

Hence the arrival of some of the forces behind the creation of the movement and its music- namely Yaw Tog, Kwaku Flick, Kofi Jamar and some others.

One should have been there, to witness the thrills and spills of Ghanaian music oozing out with a ground-breaking entertainment in elegant style.

Some patrons enjoyed and consumed the sounds of Asakaa as if it was reeling out of fashion.

Although Kwabena Kwabena could not perform with the live band as scheduled due to some technical constraints on the Hi-life Band Stage, he still did his best to wow the teeming young crowd.

Taking their turns to show what they do and know best, King Promise and Sarkodie blended in well with their collaborations on stage. So was Sefa, Mr Drew, Amerado, Camidoh and D-Black.

Everything on the main stage went arguably well despite the timing of the performers. The other challenges facing the Hi-Life-Stage was the intermittent power outages that was disturbing the flow of the show.

So, the powers that be at Akwaaba-UK should make it their focal point by solving that power problem that has been plaguing that stage for some time now.

MC Clarke Pentoa started the show as usual in his full pump and pageantry while DJ Foss ended the show as neatly as one could imagine.

Anyway, we will see what Ghana Party in The Park 2022 brings in its wake, for now I rest the ink.