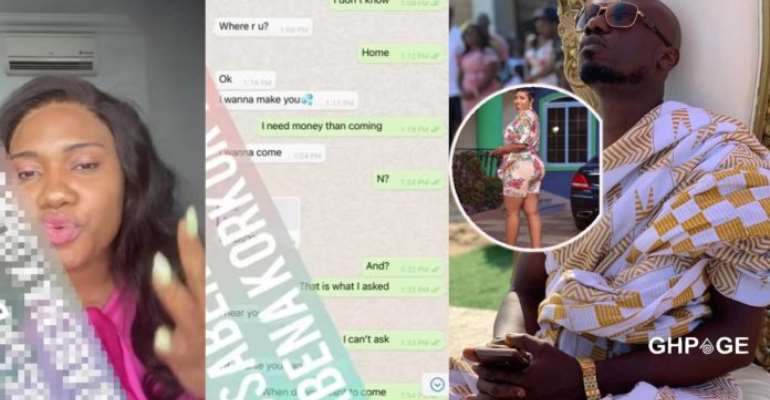 Abena Korkor has dropped a WhatsApp chat of Ghanaian blogger, Eugene Osafo Nkansah aka Nkonkonsa begging in tears to lick her tonga.

In screen shot chat, Nkonkonsa was telling Abena Korkor he wants to lick her and make her 'come' but the lady told him it’s money she wants not just to 'come.'

Nkonkonsa defended himself that money is not everything but things like 'coming' after being licked are some of the precious things in life.

Abena Korkor vowed that she never allowed Nkonkonsa to sleep with her but on several occasions, she gave in out of frustration and allow him to lick her.

She praised Nkonkonsa as one of the best lickers but she didn’t see him as her class of man enough to allow him to put his pendrive in her slot.

The lady went on to make startling revelations like Eugene told her he didn’t love Victoria Lebene, his wife.

She said the blogger told her it’s her he wished he had married.

The second video from Abena Korkor is a reaction to Nkonkonsa showing a message Abena Korkor sent him apologizing for mentioning his name in her 'chopers' exposé.

This angered her when Nkonkonsa gave his phone to the host of Peace FM entertainment review on live program to read.

Angered Abena Korkor by the action of Nkonkonsa and to prove she was not lying but she only apologized for shaming him publicly, she dropped the second bombshell.