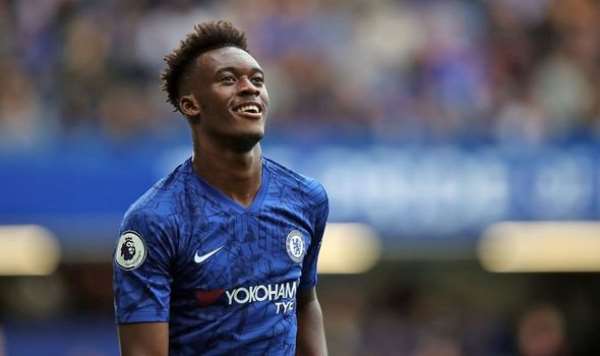 Chelsea winger Callum Hudson-Odoi has arrived in Ghana for a vacation after winning the UEFA Champions League last month.

The 20-year-old touched down at the Kotoka International Airport on Wednesday evening and was welcomed by Ghanaian Afrobeat star King Promise .

It will be recalled that the singer posted a photo of a Skype call he had with the footballer following Chelsea’s Champions League triumph last Saturday.

In a series of videos that have gone viral on social media, Hudson-Odoi is seen enjoying the rousing welcome at the airport by dancing to Ghanaian traditional music.

A separate video also shows the winger chilling King Promise in Accra, who later forced him to utter some words in the Twi language.

The youngster was left out of England’s squad for Euro 2020 despite helping Chelsea to be crowned champions of Europe.

The Blues shocked the world by recording a narrow 1-0 victory over Pep Guardiola’s Manchester City in the final of the Champions League last Saturday.

Hudson-Odoi didn’t feature in the final but played 37 matches for the Blues in all competitions, scoring five goals.

While some of the players have joined up with the national teams for the upcoming Euros, others are also currently on vacation.

Hudson-Odoi, who is the son of ex-Hearts of Oak midfielder Bismark Odoi, is among the latter and is currently in Ghana for the off-season.

The 20-year-old picked England ahead of Ghana for his international career and has since made three appearances for the Three Lions.