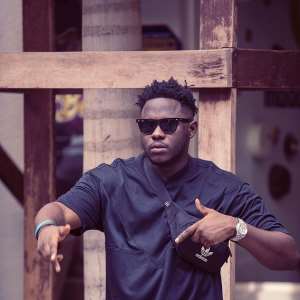 Ghanaian rapper Medikal has revealed that he was heavily drunk on his wedding day and didn’t realise his wife had fainted.

In March when the two lovebirds got married, they caused panic when Fella Makafui fainted.

According to reports, Fella Makafui alerted the MC to announce they would be leaving the stage when she felt tired. The actress held on to Medikal for support and waited to leave the stage. However, a few minutes after that, she fainted in the arms of her groom.

Reacting to the event on Kingdom FM, Medikal stated that he was not aware his wife was about to faint because he was drunk.

According to Medikal, it was a memorable day for him so he drunk to a pulp to enjoy the day.

Hottest Photo Reports
Catch up with all the political quotes from our politicians.
Advertise here
More Couples/Break-ups
ModernGhana Links
Ayawaso North NPP Chairman ties the knot​ in Accra
I'm a man — Nollywood actor Yul Edochie replies critics over second wife wahala
I'm not bothered about women around my husband after 15 years of marriage — Wife of Adjetey Anang
I thought I could change my husband because he was a pastor — Gospel singer Agnes Opoku Agyemang opens up on marital abuse
"I was on set" — Mercy Johnson opens up on absence at Rita Dominic's traditional wedding ceremony
LAPD arrests Rihanna's baby daddy Asap Rocky over gunshot incident
I was always deprived of sex — Xandy Karmel reveals more about her broken marriage
I lost four children to miscarriages in my abusive marriage — Xandy Kamel reveals
Funny Face's ex wife welcomes baby [Photos]
TOP STORIES