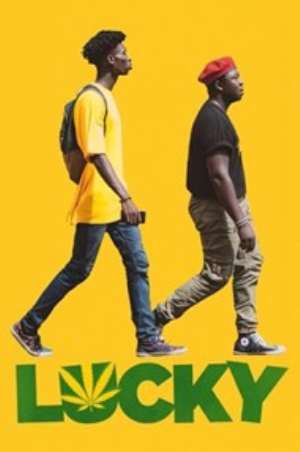 It’s time to get Lucky, as this thrilling new feature from first time director and exciting new voice in Ghanaian cinema Fofo Gavua is set for its UK premiere this May. Garnering critical acclaim on the festival circuit and selected for Lights, Camera, Africa Film Festival and Hip Hop Film Festival West Africa, this gripping drama follows the exploits of a plucky, down-on-his luck teenager trying to make his way in the world.

Giving a rare insight into the life of Ghana’s youth, we meet the endearing Twitter-celebrity Lucky, played with aplomb by rising star Kumi Obuoabisa (Sophie), who lands a date with Nutifafa (Jane Efya Awindor), the most popular girl on social media. Desperate to move on from his ex Pamela (Buki Akiwumi – Sophie) and make a quick buck to impress his dream woman, he teams up with longtime friend Wadaada (Solomon Fixon-Owoo Jr – Eden, Aloevera), and their plan is to sell a MacBook to fraudsters. But things don’t go the way they expect and the ensuing turn of events will keep you on the edge of your seat. Just when Lucky thinks nothing else can go wrong, it manages to…

Funny, tragic, devastatingly sad, with comedic characters loosely based on those from the creator’s own life, Lucky is a harsh yet hilarious glimpse into the unpredictable life of a Ghanaian boy who finds increasingly inventive ways to solve the problems that the world throws at him. Will he finally get lucky?

Released on digital Monday 10 May