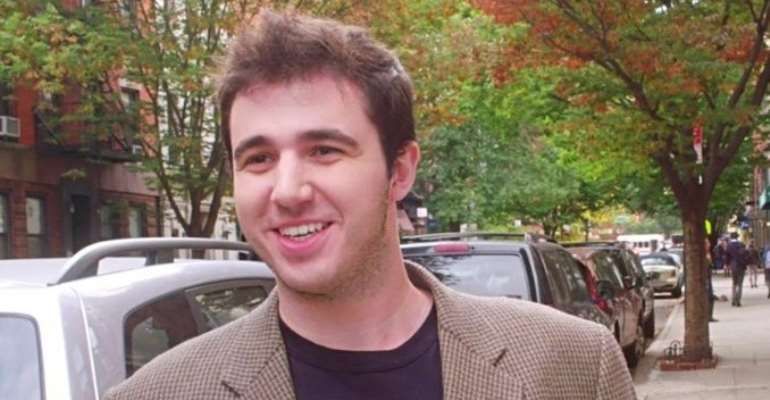 I first met Tyler Silvers at South by Southwest (SXSW) about half a decade ago. I knew Tyler's dad Dean very well. Dean was David O. Russel's first producer, shepherding Spanking the Monkey and Flirting With Disaster to the big screen. He was also a very early supporter of my vision for Stage 32 and contributed some fantastic material to the Stage 32 Blog.

I was meeting with Dean to discuss a couple of ideas and initiatives regarding the platform. We had blocked out a half hour. Dean showed up with Tyler Silvers and we immediately began digging in. Our planned half hour turned into almost 2 hours.

Our business conversation turned to a creative and project oriented one. And that's when I discovered that the apple truly doesn't fall far from the tree. Tyler was lockstep with us throughout, not only going toe to toe, but presenting ideas of his own, especially when it came to storytelling.

Through the years, I've been thrilled to watch Tyler and his brother Forrest hone their creative skills, forging one hell of a partnership in the process. And it's also been fun to watch Dean, who was right in the thick of the 90's independent film revolution, adjust to new media, including the digital explosion. So when the Silvers' clan approached me to play a part in the producing team of their new digital series, Becoming Jif, it was an offer I couldn't refuse.

One thing I've always loved about the entire Silvers family is their commitment to complete honesty and transparency in all things - life and business. I think that will come clear when you read the blog below.

When you're through, I would love if you would take a moment to check out Becoming Jiff over on Amazon. You'll get a front row look at the broad talents of Tyler Silvers and Forrest, and you'll have some laughs in the process.

Writing a screenplay can seem pretty intimidating. When have you ever written a 100+ pages of anything, right? But before I go on, let me just say that the info I'm about to offer are tips and strategies that helped me most. Everyone is different and there is no “right” way to write a screenplay.

Now, before you start, remember to always keep TWO BIG THINGS IN MIND:

1) Screenwriting portrayed in movies and TV is ridiculous. No one really gets that “moment of inspiration” and sits at the typewriter and just writes and writes through the night and then they wake up the next day and have this “perfect screenplay.” That’s just not going to happen. Screenwriting is a process.

2) There is only 1 REAL GOAL for writing a screenplay, and that is to turn it into a real-life physical movie that people will watch.

Don’t worry if you think your screenplay might be bad, the first draft of your first screenplay is going to be bad (and confusing and even incoherent). That doesn’t mean the script is bad. It just mean's it's the first draft. But you really have to focus on the positive! There will be a few pages or moments or maybe a couple of lines that are actually good. Celebrate those and know it’s the start to something great.

Remember that your first screenplay will also teach you how to write more screenplays in the future, and it will get easier.

So how do you start? Well, the first thing you have to do is come up with an idea that is good and unique enough to turn into a movie. This is DEFINITELY the hardest part.

I really don’t believe just sitting and thinking is going to get you a great idea for a great movie. I recommend living your life and starting to keep a journal, email, word doc, texts etc. of any ideas, jokes, scenes, lines, or anything that pop into your head that seems “good.”

This “ideas book” is key. The more you add to it, the more you can start to see what ideas are actually good and what are bad. Your brain is like a muscle and this how you strengthen it. The more ideas you write down, the more it frees your mind for more ideas.

Your brain is like a computer, and the more you write down, the more hard drive space you free up for more ideas. If you don’t write things down, your brain (the computer) overfills, gets slower, and starts to freeze. Once that happens, you may forget things that were important.

After doing this strategy, one day (maybe at 4 o'clock in the morning when you’re half-awake watching the morning traffic report, even though you don’t own a car) you might get a good idea for a movie or movies. Once you get these ideas in your head, what do you do?

You write them down.

You start to think about the characters of each idea.

You start to think about how it will feel watching them on a big screen in a theater.

And then you have to make a decision; which of these ideas will you spend the next months to a year (or years) working on to turn into an actual screenplay?

Once you choose an idea, then it's time to write a script that will become a movie that people will want to see.

If the opening exterior to your script is “Nebula 9” and the first sentence involves the lead stepping out of a spaceship the size of the Empire State Building, chances are that the movie isn't going to get made right now. You have to be realistic with your first script. Still, save those ideas for your “Avatar” film for down the road. But right now, try to write something with a small budget so it actually gets made. All those stories you may have read about scripts being bought are usually BS or dated. No one in this day and age is going to pay a first time screenwriter with no credentials a ton of money for their script.

So now with your lower-budget film ideas, you have to find a few people whose opinion and taste you respect. It could be friends or family. I know before I write anything, I run the movie ideas by the same five people every time. I need to get all five to agree to ONE idea before I start writing. I need a unanimous decision.

Are You Ready to Start Writing?

So here you are. You made it. You followed the steps, spoke to the right people, and came up with a great low budget idea for a script that you will now spend every waking second working on.

But how do you actually write a screenplay?

Well, before you can write one, you gotta read one. Or a few. From start to finish, read a script of a movie from the last five years that you liked. Don’t read old “legendary” movies. Just read something simple, enjoyable, and recent to understand the formatting.

You’re probably thinking, “Now that I have my idea and I understand formatting can I start writing my screenplay?”

The answer is still No. You now have to outline your screenplay. Write a little bit about the characters and their backgrounds and motivations. Then write summaries of what scenes are going to happen and why. And if you want to follow a basic structure, you should know how your script will start, (“the inciting incident” or “change”) and have ideas for the middle (“the resolution”, usually the hardest part to write) and how it should end (“the climax”) or ideas for the ending.

You can get caught up in the semantics of writing and get overwhelmed by teachers and books on writing. You can study the 3 ACT system, the 5 ACT system etc., but just because you follow “all the rules” doesn’t mean you’ll make a great, entertaining, or interesting film that people will pay to see.

Just remember that all scripts really only follow 1 basic rule: There is a life and there is a change to that life. That’s it. Just make sure it’s entertaining and somewhat unpredictable to keep the audience's attention so they'll want to watch it to the end.

Now that you have your outline set, your summaries for the opening and other scenes (you don’t need every scene written out, you can figure that out when writing), and a great sense of your characters and their motivations, NOW YOU CAN OPEN THAT FINAL DRAFT PROGRAM and start writing.

Everything should just start pouring out because you’ve already outlined it. When you start to slow down and feel like you can’t write anymore, STOP. Live your life a little bit, and then go back to it. You’ll realize that all of the ideas that pop into your head during your break are for your movie. Continue to write them down, develop them, and insert them into your screenplay.

Did I Do it Right?

Even with these steps written out, I realize writing a screenplay still ain’t easy. And even after all of this, you still have to go to people you trust to help do rewrites. It doesn't matter how many you do, the goal is to make it great so that people will want to watch your film when it gets made.

Remember, there is no right or wrong way to write a movie.

Take this blog post for example. It might be messy, a little stream of consciousness, maybe a little all over the place, not the most “grammatically correct,” but what matters is t hat it entertained, interested, and hopefully helped you. After all, it did get you “here” -- all the way to the end, which is all anyone can really hope for when writing anything.

We wish you good luck on your writing journey, and can’t wait to see your next movie (or show) in theaters (or on TV, or the internet).

All the best, Forrest and Tyler Silvers.