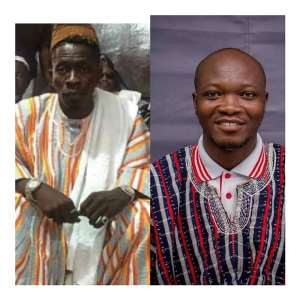 They’ve been making certain claims about some failed promises of Shatta Wale two years ago when he was made a King in Tamale.

The PRO for the Youths Of Tamale, Issahaku Mohammed Tajudeen in his interview with Kumi Kasa and DJ JahSolo on Koforidua based ABEN 94.9 FM’s Entertainment Friday Show, he revealed that Shatta Wale has not stepped foot in Tamale after his promises two years ago

In shatta Wale’s Promises, he said, “music is a good business that can help the youth live a better life in the Northern region, therefore, he is going to help them make money out of music.

Shatta Wale again added that, “farming which is a popular occupation in the North will be something he will venture into so that he will employ more of the youth in the Northern region. He finally promised to build a big musical studio for the artistes in Tamale. Our source says Shatta Wale has refused to do any of the above.