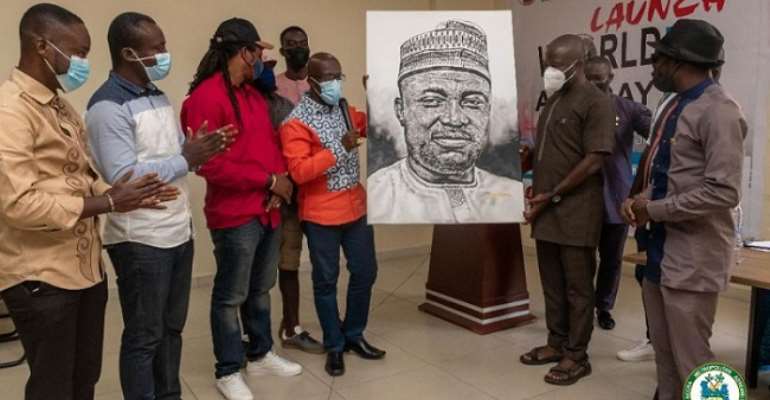 A scene from the launch

World Art Day is an international celebration of the fine arts, which was declared by the International Association of Art (IAA), in order to promote awareness of creative activity across the globe.

In Ghana, the Accra Metropolitan Assembly (AMA) in collaboration with the Ghana Association of Visual Artists (GAVA) has launched the 2021 edition in Accra to pave way for various activities

The event, slated for April 15, 2021, is on the theme: “Reimagining Ghana’s Future Artistically.”

Some of the activities lined up for the celebration include outdoor meetings, culture and artistic expression on the high streets of Accra, an art exhibition at the forecourt of the AMA, among others.

Speaking at the launch which was graced by a number of personalities as well as members of GAVA, Mr. Mohammed Adjei Sowah, the Accra Metropolitan Chief Executive, said the assembly was committed to ensuring that art thrived in the city.

According to him, art contributed to the economic growth of a city, hence his interest in ensuring that the assembly’s focus was not only on traders, building permits, and school infrastructure but promoting the arts.

He mentioned that the introduction of the 'Accra for Arts' initiative was intended to make the city a creative one that everyone had space, confidence, and something to do or contribute to.

On his part, the President of GAVA, Nana Otuo Otuoahene Acheampong, indicated that arts were worth celebrating as it provokes, informs, and challenges the visual representation of ideas, thus the relentless efforts of artists and active collaborations to reimaging Ghana’s future artistically and make it a reality.

The country representative of UNESCO, Karl Ampah, lauded the Accra Metropolitan Chief for showing keen interest in art and efforts to make Accra a creative city.

He urged him to encourage the youth to create more artworks that would generate income for them and uplift the economic development of the metropolis.

Madam Edna Nyame, the Executive Director of the National Commission on Culture, said art was an important element of promoting the country's culture and generated revenue.

She called on artists to take a keen interest in creating arts that would attract local and international patronage.