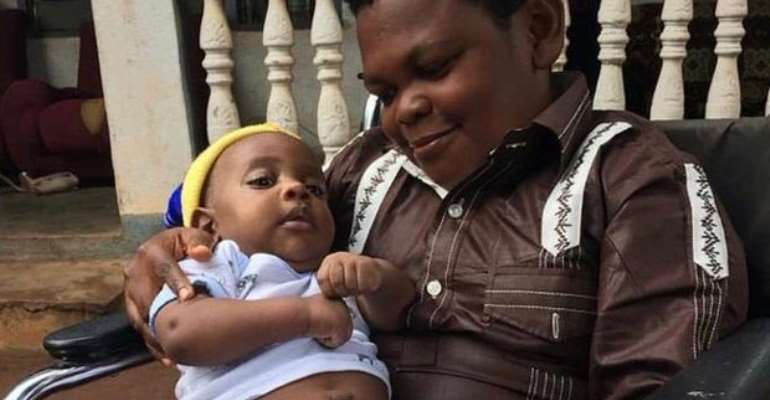 Celebrated Nigerian actor, Osita Iheme, popularly known as Pawpaw, has sparked a new debate about his parenting after he flaunted a baby believed to be his on social media.

The diminutive actor in March 2019 was reported to have welcomed a baby boy with an alleged Ghanaian “Wife”.

But he has since not confirmed or denied fathering a child and also marrying.

On Wednesday, however, he shared a photo of himself carrying a baby on his lap and spoke about what the greatest goal of a parent should be.

According to him, the greatest achievement of a parent is to love their kids and give them anything they require.

“As a parent your number goal is to love your children and strive hard to cater for them (prayer emoji). God is good,” he tweeted.

The photo and its accompanying comment have elicited a lot of questions including whether he is the father of the baby.

The 38-year-old is currently one of Nigeria's most celebrated actors.

He started his acting career playing minor roles of a child in Nollywood movies. In 2002, he became a household name after playing Pawpaw alongside co-star, Chinedu Ikedieze, in the family comedy film titled Aki na Pawpaw. He has since not looked back. His family life has however remained a secret as he doesn't give too much out for the public.