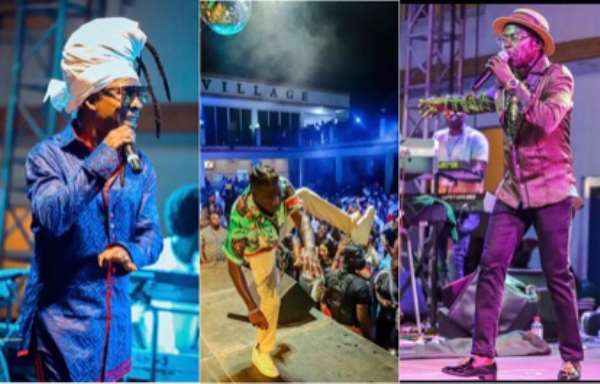 Individually, Kojo Antwi, Amakye Dede and Stonebwoy never fail to give patrons of any show a performance of a lifetime.

Now imagine having the three on one stage? That’s what happened at the maiden edition of the 2 Kings Live In Concert, powered by 360 Group.

The mega LIVE BAND concert pulled hundreds to the plush Bayview Village located at Atomic Junction at North Legon for a good thrill.

The show which was much publicized across various platforms for is designed to welcome the new year in grandeur. It also creates a platform where these legends have a direct encounter with their fans.

When the Maestro, ‘Mr Music Man’ Kojo Antwi took the stage, the dancing floor was chocked with patrons as he thrilled them to an impressive repertoire of smash hits from reggae, highlife and other genres.

The music legend performed songs such as ‘Emrika’, ‘Music Man’, ‘Tom and Jerry’, and ‘Medofo Pa’.

Kojo Antwi brought his energy and simply shook the house for over an hour with nonstop music as the crowd sang along.

Next was the BhimNation President, Stonebwoy, who stepped up the tempo. The ‘Reggae and Dancehall’ act, who humbly considers himself as a young legend, was on fire!

He dished out hit songs like ‘Tuff Seed’ to ‘Activate’, to his controversial ‘Putuu’ freestyle.

On a more ‘Serious!!‘ performance, Abrantie as affectionately called, Amakye Dede gave out something special. He gave the fans the opportunity to sing their favourite Dede songs backed by himself.

The night also saw notable personalities like John Dumelo, Nana Aba Anamoah, Fred Nuamah amongst others who enjoyed the best of classic music and performances.