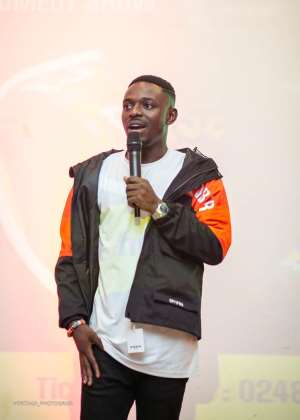 Evergreen rising Ghanaian Standup Comedian, Comedian Waris, was the big deal at the Funnier than COVID Comedy Show held at the Snaps Cinema during the Christmas season 26th December.

The comedy event was organised to climax the very challenging year 2020 and also to make the ending of the year a more relaxed one and stress-free.

Holidaymakers cheered on and stood on their feet throughout the performances of Comedian Waris making him the unplayable lead act on the night.

Comedian Waris was born in Kumasi; his father is Umaru Ibrahim. He had his primary education at Kingsway School and went on to Odorgonno Senior High School. His tertiary education was at Top Media School where he graduated in 2014.

Waris worked as an attache at both Top FM and Rainbow Radio as a sound engineer in 2014 later moved to Channel 5 TV in the same 2014.

In 2015 he worked at ecstasy entertainment as a stand-up comedian and personal assistant to award-winning comedian DKB.

He established the Waris Foundation, which occasionally donates to people leaving on the streets in Ghana.

Latest Photo Reports
Catch up with all the political quotes from our politicians.
Advertise here
More from Comedy News
ModernGhana Links
Comedians are not fools; they are smart, intelligent and creative — MJ the Comedian
Noire Comedy uncensored set to hold on April 30
'You are a stupid, miserable local comedian badly brought up' — Joy News' Isarael Laryea's wife blasts Comedian OB Amponsah over Covid-19 joke
TOP STORIES