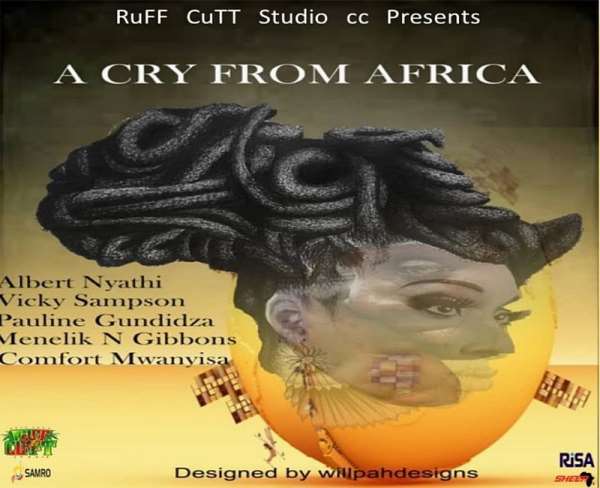 The delivery of ‘A Cry From Africa’ is a phenomenal physical interpretation of the power of Africans uniting to deliver a common purpose. Breaking through COVID-19 barriers, to achieve the outcome this project was coordinated by producer and artists digitally cross countries.

Gustav Smythe a seasoned producer and musician based in Zimbabwe, deeply moved by events leading to highly publicized loss of black lives in the USA and now Nigeria Special Anti-Robbery Squad [SARS] with no recourse felt a compelling need to stand in solidarity with the affected African brothers and sisters across the globe in the fight against racism and police brutality, declaring that human dignity is a basic human right rather than an aspiration.

Determined to reach strategic decision makers globally and put an end to racism, police brutality, the violence and hold perpetrators accountable while providing support, soothing and spiritual healing Gustav Smthye laid down the track and added a simple chorus highlighting the issue then approached 5 artists who he knew shared his sentiments saying “We need to come together as one letting the world understand that we may be scattered and separated by borders but we are united. ‘A Cry From Africa’ a soulful track with heart wrenching lyrics is meant to pierce the conscious of leaders, bring comfort to the victim families, acknowledge those affected by these tragic events while calling for change, peace and reconciliation, unity and harmony and love to change the narrative and path of the current events that affect our beloved people. NO to murder of Black People.”

Coordinated digitally by Gustav Smythe, the artists united and delivered a powerful heart wrenching track crying out to world leaders to stop the killing at home and abroad as our people were taken out of Africa by force, not choice when they hurt, we hurt why do we have to fight for our lives, we just want to live, we just want to breath. Nigeria Special Anti-Robbery Squad [SARS] #StopTheKilling This world needs peace, happiness and joy which is attainable Quote from #BlackLIVESMatter front runner Jesse Williams: “A system built to divide and impoverish and destroy us cannot stand …………. if we do”

The artistes that Gustav cherry picked who delivered this powerful rendition covering #BlackLivesMatter: Albert Nyathi: Based in Zimbabwe, a university graduate, a multiple award, honours and prize winning Imbongi, poet, artist, author and philanthropist with a remarkable track record that includes sitting as chairman on several boards. Albert has performed across the world and for Heads of State and numerous dignitary events.

He championed AIDS awareness programmes, gender awareness, Environmental and Climate Change programmes, Voluntary male circumcision, fund-raising projects and music productions on behalf of many organizations Vicky Sampson: Based in South Africa, legendary actor and artist best known from the track ‘Afrikan Dream’ one of the most recognisable songs in South Africa.

It was used as the theme song for the 1996 African Cup of Nations; a tournament in which Sampson performed at the opening and closing ceremonies. Bafana Bafana (the South African national men’s soccer team) would go on to win the tournament. This only increased the demand for Afrikan Dream, with the song being ubiquitous on radio stations across the country. Another consequence of the popularity of the song was the high number of corporate functions which Sampson was asked to perform at over the next few years.

The album, ‘Zai’, won 4 SAMAs in 1996, namely: best pop album, best video, best female artist, and best director. Vicky has continued to bag awards and grow as a robust South African brand. In 2018, Sampson started work discovering and developing young talent in South Africa, as co-director of a company named Mzanzi Cultural Industries (MCI). MCI took on 46 young people in order to develop and nurture them into exposed and earning artists by passing on the experience that Sampson has gained over her career.

MCI’s long term goal is an academy for young artists. Pauline Gundidza: Based in Zimbabwe, 35-year-old ZIMA award winner, vocalist and mbira artist Pauline is also known for championing the rights and welfare of women through sharing her own life experiences and supporting global campaigns that stand for the same cause. She advocates for gender equality, health, community development and human rights.

In his own words “I am part of the song because I have family and friends that have left the continent to look for greener pastures so they can help family back home. I can only imagine what they go through when they walk out of the safety of their home. Imagine walking out of your house and you don’t know if you going to make it back home. I was not created black so I could be used for target practice.”

Accolades include 3 Official Mandela tracks, performances of prestige platforms that include Bob Marley 2019 tribute concert stage, Mandela Day 2016 stage, Mandela Century100 2018 stage, In South Africa Johannesburg Counsel for the relaunch of the Moral Regeneration Movement. Works with Saeed Foundation on feeding schemes and Abused Woman and children. Don Dada felt compelled to add his voice joining forces with the likes of Burner Boy, Davido, Wizkid in Nigeria and US Black Lives matter front runner Jesse Williams stating that as influencers they have to be the face, voice and messengers of social issues that rob us of young lives.

He added a plea to other social influencers “The word that reaches the furthest the fastest comes from social influencers so I encourage Africans at home and abroad to use your voice and platforms to encourage others to come together as one to build that better and progressive WORLD #LetAfricaLead” at home and abroad Don Dada’s staccato style of rap with a no nonsense straight to the point lyrics telling how the more we breathe, the more they kneel on us with cellphone footage showing our pain and experience and calling for love, unity and peace. #BLACKLIVESMATTER #ENDSARS #ENDSARSNOW #NIGERIA The single will be available on all digital services worldwide distributed by Beatroot Africa.