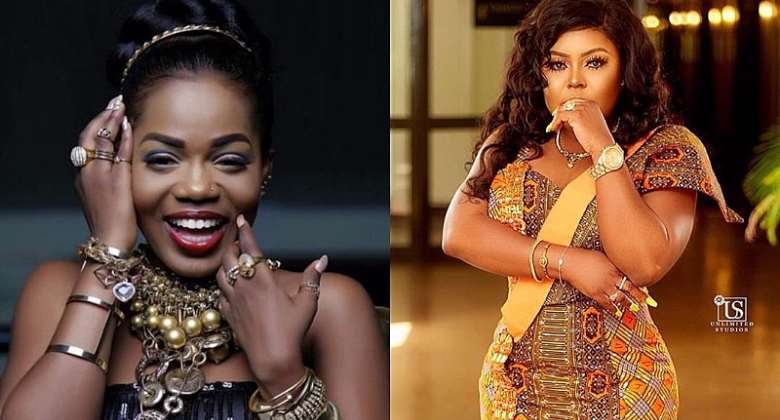 The beef between Afia Schwar and Mzbel is getting hotter and dirtier as more deep secrets are being disclosed by both the actress and the singer.

Afia Schwar has come again with another controversial revelation about Mzbel and social media cant believe it.

Afia Schwar is proud of herself, according to her, at least someone agreed to marry her and the person did.

At least someone agreed to marry me, you had a baby with a community baby daddy, why is he ashamed of you? Show Ghana your DNA result. Afia said.

However, a series of posts by Afia Schwar on her Facebook wall disclosed that Mzbel rather raped the founder and leader of Prophetic Hill Chapel, Nigel Gaisie and not the other way round as it was made known to the public.

In a followed post, Afia again revealed that Mzbel was introduced to Nigel Gaisie by her Sugar daddy but later turned round to blackmail Nigel for 50K after she had sex with him.

In another development, Afia Schwar has dared Mzbel to come out and tell Ghanaians how she won the ECG Ambassadorial role in 2015 if she wasn’t chopped in exchanged.

The revelation that got social media ablaze was when Afia mentioned the word ‘Papa No’. According to Afia, the wife of the Papa No caught Mzbel after she sent Papa No a message; ‘‘it is my time to f*ck you’’.

More from Exclusive News
ModernGhana Links
'I once ate faeces before I was given food' — Celestine Donkor recounts cruel treatment by former madam
Shocking: Netizens blame baldness on too much Gob3, lack of breast milk
I fall in love quickly but always ends up heartbroken — Salma Mumin narrates bitter experience
TOP STORIES

“We've not thrown hands up in despair, gov't determined to b...
14 minutes ago