Slay Queens Brawl Over A Flagbearer 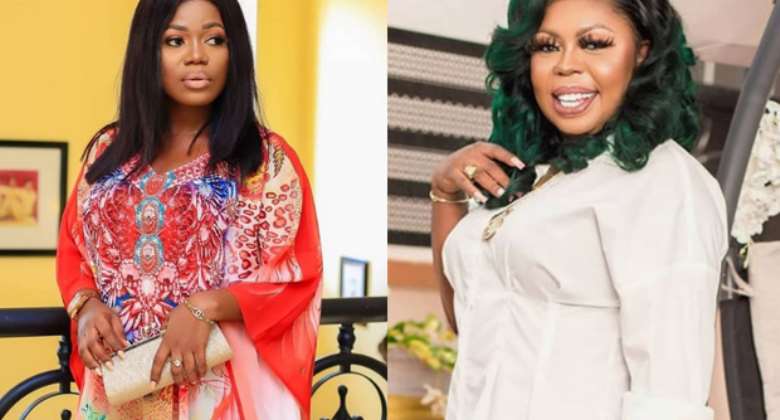 A fight has ensued between two controversial ladies in the showbiz industry after they set social media on fire by trading all sorts of accusations and counter-accusations.

Valentina Nana Agyeiwaa, known in showbiz circles as Afia Schwarzenegger, and Belinda Nana Ekua Amoah, popularly called Mzbel, are at each other's throat over a flagbearer in connection with a supposed blackmail.

The two social media freaks who were once friends are largely sympathisers of the opposition National Democratic Congress (NDC) and campaigned heavily for the ruling party in 2016.

However, recent comments by Afia Schwarzenegger on national issues are suggesting she might be breaking ranks with the NDC even though Mzbel is still a strong advocate of the party.

The fight appears to have started with an interview Afia Schwarzenegger granted 'Neat FM' in Accra last week and made all sorts of allegations against Mzbel, including the fact that the artiste (Mzbel), slept with her (Afia) boyfriend.

Afia Schwarzenegger followed it up with some mind-blowing social media posts suggesting that Mzbel is blackmailing a popular flagbearer after having sex with him.

“Be a woman and say ‘fi’. Come n tell the world the flagbearer you are blackmailing before I do (sic),” Afia wrote on her Facebook timeline and served notice with an ultimatum attached.

The allegation comes not long after actress Tracey Boakye came publicly to say she snatched Mzbel's man who later became known as 'Papa No', setting the media landscape ablaze.

The two showbiz personalities were once best of friends and supporters of the NDC until they fell out two years ago. They have since been having a go at each other. Afia has also stopped campaigning for the NDC and its flagbearer, John Dramani Mahama.

Last week, Afia in an interview on 'Neat FM', alleged that Mzbel betrayed her by sleeping with her boyfriend, indicating that as a reason they were no longer friends.

Then on Sunday, Mzbel responded with a post asking her followers whether she should fire back at Afia. In that post, she said, “Tomorrow and Tuesday is my off day so I have all the time… (sic).”

“How many of you want me to respond to the only bitch in Ghana who borrowed money to pay a man's groom price because she knows no man will ever love or care about her?”

But before dust could settle on the post, Afia had already reacted, revealing 'secrets' that they shared, including the 'blackmailing' allegation.

“How can you claim Nigel (Prophet Nigel Gaisie) raped you but he f**ked you 3 (three) times?” she questioned Mzbel.

She also made other wild allegations saying, “B***h say fi! You remember begging me to sleep with ****** be cos that is the only way he will feed your bastard son (sic)?? Curse me with Antoa if I am lying! K**sia we were sitting at rockSTONES office…YOU KNOW WHY I REJECTED that s**t,..YOU STINK, I can't sleep with anything that sleeps with you…Rape Ambassador…K***IA GYIMIIIiii

“Be a woman and say fi! Come and tell the world the flagbearer you are black mailing before I do…akA IT IS MY TUR9N TO F**K YOU…I still have the screenshot Do FI AND SEE,TUTUNI ABOA K**SIA MZBEL Odwan call antoa n swear.. if I am lying.”

On Monday, Mzbel replied Afia's claims in another post but appeared to have stayed away from the 'blackmailing' claims.

She wrote on Instagram, “Wow! Whatever it is you think I have achieved in life that is making you bitter to lie this bad, May You achieve it too Times 100 waina this level of anger is dangerous for your height (sic)!”

She added, “You think u can use Me to Tarnish other people for some dog bone as usual abi? Herh FI wai… Mesi Fi Anything else? Cos as for FI di3 I can say it saaa…Don’t come and say ******has advised u to stop or whatever! The FI di3 it is FI paaa,” she fired, adding “Is it not obvious that you’ve already been Cursed?”

“Don’t worry maybe in the next life your imaginary man may actually exist! Akwadaa no antuminti Coach no ankasa aba 3b3 face Abrewa no! Twakai mu y3 d3n KwraaaAkokra no Ada,” she concluded.