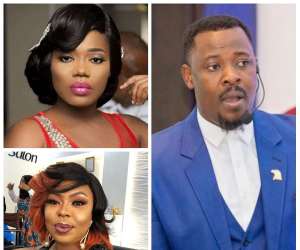 Ghanaian Comedienne Afia Schwarzenegger has disclosed that Mzbel was never raped by Prophet Nigel Gaisie, Founder and leader of the Prophetic Hill Chapel as widely claimed by the songstress

According to her, Nigel Gaisie was introduced to Mzbel by her sugar daddy as his prophet but the promiscuous Mzbel betrayed her sugar daddy by sleeping with the “Prophet” of God.

Afia says Nigel slept with Mzbel for three times but the singer later on went ahead to blackmail Nigel and took GHC 50,000.

This revelation comes as a shock to many because Mzbel had earlier indicated to Kennedy Agyapong that Nigel who she describes as a fake Man of God raped her but some leaders in the NDC had called on her not to go public.

Also, Afia Schwarzenegger disclosed that in 2015, Mzbel was made an ambassador of the Electricity Company of Ghana because she slept with a “big man” in that office and not because of any influence she wields.

Afia Schwarzenegger made this revelations when she was dared by Mzbel to tell the world about her secrets she is keeping.