...…Erica Wins Head of House For The Second Time 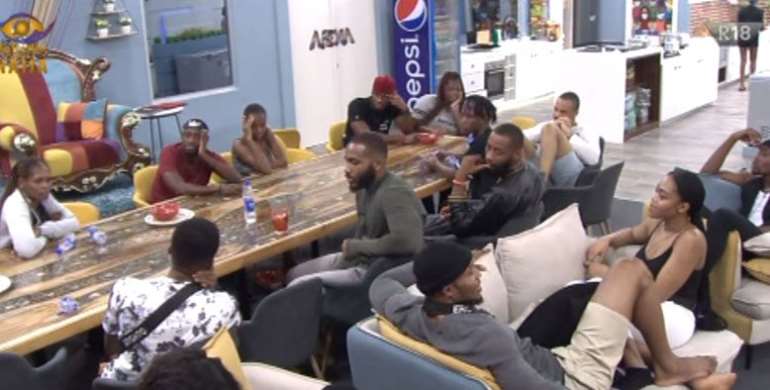 Biggie loves to keep both the fans and the housemates on their toes by throwing unexpected twists into the game. He officially re-introduced the old nomination and eviction process that fans were familiar with from the previous season.

All 11 housemates had to nominate two of their fellow housemates up for possible eviction, which resulted in Lucy receiving the highest number of nominations with 6 votes, Laycon and TrikyTee drawing with 4 votes each and Kiddwaya, Nengi and Vee with 2 votes each, Dorothy and Ozo with 1 vote and Neo with none.

Earlier on, the Head of House (HoH) game took place. After the triple evictions last Sunday night during the live show, the heat was on as the battle for HoH blazed hotter than ever. This fight saw Erica victorious.

Since Ozo was the HoH last week, he couldn’t compete in the HoH game. Kiddwaya also couldn’t participate or be chosen as Deputy Head of House (DHoH), because of the suspension placed on him by Biggie as punishment for violating house rules two weeks ago during Biggie’s vacation away from the house.

The HoH game ran its usual course with the board game but, Biggie introduced some new obstacles to the game. The games kicked off with a three-way tie between Neo, Vee and Prince on step ‘9’. Then Erica came ripping through all the way to step ‘29’. At a point, it seemed Laycon had a chance at beating Erica, but sadly he didn’t make it.

At the end of the gruelling games, Erica emerged as the HoH for this week. Unlike the previous weeks, in which the HoH’s had 20mins to nominate a DHoH, Erica was given one minute to decide, and she nominated Prince, who happily accepted. For the guest choice, Biggie swiftly told her that she couldn’t pick Kiddwaya as his suspension extends to all HoH benefits, including guest opportunities for the next two weeks.

Erica went on to choose Trikytee as her guest, while Prince chose Dorathy. Erica and Prince are exempt from evictions this week, and we can’t wait to see how she fares for her second term as the HoH.

Voting opens tonight at 10pm WAT and will close on Thursday, 3rd September at 10 pm WAT.

Fans can now vote for their favorite housemate to stay in the Big Brother Naija on the website and mobile site – africamagic.tv/bigbrother .

Also, via SMS by texting VOTE and the NAME of the HOUSEMATE to 32052. (SMS costs N30 for Nigeria only and available on the participating networks – Airtel, MTN and 9Mobile).

For GOtv customers on Max, they get 350 votes and GOtv Jolli customers get 200 votes. Voting on the MyDStv and MyGOtv apps is open only to subscribers in Nigeria with eligible packages and an active subscription.

High attendance on first day of parliament's 3rd meeting of ...
39 minutes ago