I'm The True Artiste Of The Year, Kuami Eugene Only Has It Written On His Plaque — Kofi Kinaata 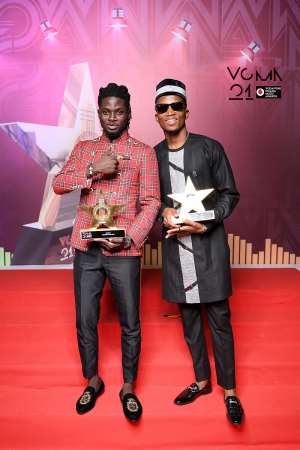 Kofi Kinaata has declared himself the true Artiste of the Year despite the crownning of Kuami Eugene by the VGMA organisers over the weekend.

Amidst the conversation surrounding who truly deserved the award, the Ghanaian singer who was also nominated for the category said "I know I’m the Artiste of the Year. It was just on the plaque [for Kuami Eugene] but I knew it’s mine”.

Speaking on Luv FM’s 'Oseikrom Top Ten Chart' show with DJ Reuben, Kofi Kinaata when asked about his expectations before the awards show, replied: “I wanted everything". However, he added that he wouldn’t say he was disappointed, emphasizing that “It could have been me too.”

He continued that “Looking at the year under review, it was Kofi Kinaata. I know my songs are the best,” he added. Taking solace from words from his fans, he said that “Majority of Ghanaians will say is Kofi Kinaata but aside the judges, anything can happen".