VGMA21 Through My Lenses 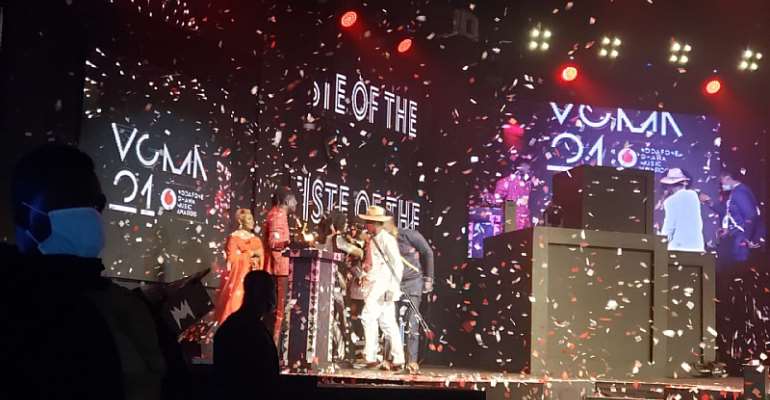 I watched snippets of yesterday's VGMA21 and I couldn't make head or tail of messages contained in songs of all the performers, who, in a single song, will speak patoa, pidgen, yuroba, hausa, buzanga, dagbani, nzema, American and British slungs and so on.

There is this erroneous mentally by our contemporary Ghanaians in the showbiz industry, particularly the singers, that, it is fashionable to sound and appear American in order to gain acceptance; but who says your by-force rap can ever appeal to Americans?

Unlike the days gone by, a contemporary Ghanaian song has neither sequencing-line nor, clear-cut message of wisdom. Music, which simply means "meaningful combination of sounds" has now been reduced to an aggregation of bogus noise.

In the area of sense of fashion with it's accompanying grooming imagery, the typical Ghanaian singer now must, necessarily, have weird unkept hair and beard. Showbiz has now become conterminous with the wearing of extremely weird 'kakaamotobi' clothes.

Indeed, they might call it 'showbiz' but absolutely nowhere in the world is the industry associated with such abominably constipated sense of fashion and style. Who says one must display dirty boxers on stage to be hip, or, fictitious foreign accent to be appealing?

And the presenters too: the audience had been advised to keep their nose masks on due to Covid-19 but were persistently being ordered to shout. Again, the program had a sizable audience but it was still being described as "virtual" and I wonder if they're ignorant.

For me, the entire program didn't appear as a music extravaganza. It was more of a circus with badly-motivated clowns and poorly-fed animals on stage, putting up woefully insipid jokes to an audience that had no idea exactly what they had spent their time and money on.

Incontestibly, Ghana's music industry faces total extinction with the calibre of caricatures masquerading as artistes. Music means a "meaningful combination of sounds" so a musician is someone capable of producing meaningful sound with various musical instruments.

However, none of these so-called artistes that were paraded at yesterday's #VGMA21, is able to blow ordinary air into a simple mouth-organ, let alone, play a proper musical instrument. These characters are not musicians but singers who often sound like frogs suffering from Covid-19.

Absolutely none of those songs I saw being performed at last night's program will survive a period of one month, in Ghana, let alone on the international stage. Coming out with authentic Ghanaian tunes that will end up as all-time classics, is an enterprise which has completely eluded our people.

BEING ORIGINAL IS WHAT WILL APPEAL TO OTHERS SEEKING TO EXPERIENCE WHAT IS NEW TO THEIR CULTURES: IT IS CALLED "SOFT POWER" IN THE PERSPECTIVE OF GLOBALISATION SO LET'S BE REAL AND CUTOUT THE 'FOLLOW-FOLLOW'.

Opinion
Powered By Modern Ghana
Open Letter To Mzbel Over Her Insults On Abdul Malik Kweku Baako, Editor-In-Chief Of The New Crusading Guide Newspaper
Three Reasons Why People Love Joe Mettle
5 Things To Know About Director Of ‘The Burial Of Kojo’ Blitz The Ambassador
The Gospel According To Shatta Wale
The Nonsensical Politically-Oriented SlayQueenism: A Letter To The Politician
The History Behind Our Sufferings [Part 1]
Who are the 12 'Most Wanted' DJs in Ghana?
A Plus, Behave!!
United Showbiz: The Plethora Of Good And An Iota Of Not Too Good For The Teacher Kwadwo Brand
COVID-19 Updates Live Dashboard
TOP STORIES

Your Petition Is Opportunistic, Populist; We’re Already Prob...
42 minutes ago