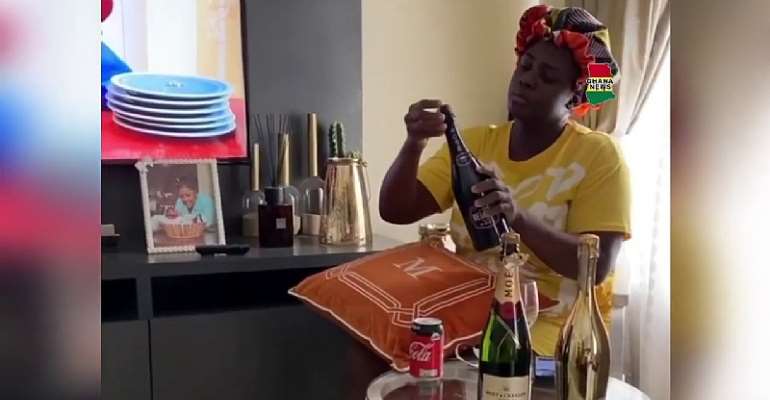 The baby mama of ‘Papa No’ has dared the Member of Parliament for Assin Central constituency on several occasions to expose her on his TV station, Net2 TV.

She dared him after Ken Agyapong on Monday accused her of blackmailing the Presidential candidate for the NDC, John Dramani Mahama, and also having a bedroom Commando fight with NPP member A-Plus.

Shortly after Kennedy Agyapong accused her, Tracey Boakye dropped about three different videos, daring the owner of Net2 TV to bring out any tape in his possession top prove that she is indeed a blackmailer.

But when Kennedy Agyapong appeared on his TV station yesterday, he couldn’t bring out a single tape and also refused to comment on the matter.

And today, Tracey is popping expensive champagnes to celebrate her victory.

She shared a video popping Belaire Rosé, Moët and other expensive champagne with the caption “Cheers to victory”.

Latest Photo Reports
Catch up with all the political quotes from our politicians.
Advertise here
More Industry News
ModernGhana Links
[Video] There is a planned accident ahead of Patapaa – Prophet Nigel
DJs Union of Ghana angry with Captain Smart for allegedly ridiculing them, calls for mutual respect
Name Kumasi Airport after Yaa Asantewaa - Mrs Dentaa Amoateng,
Shatta Wale is no where to be found – Father
Lets make Ghana Africa's number one tourism destination - DJ Mensah
Cina Soul, Adina, Sarkodie to perform alongside Kwabena Kwabena at Live Konnect
Scores of artistes and Music fans storm London for Ghana Music Awards UK
I took a break from music because of marriage — Ateaa Tina
Anas Aremyaw Anas saved me from a near suicide - former member of music group 'Nkasei' reveals
TOP STORIES