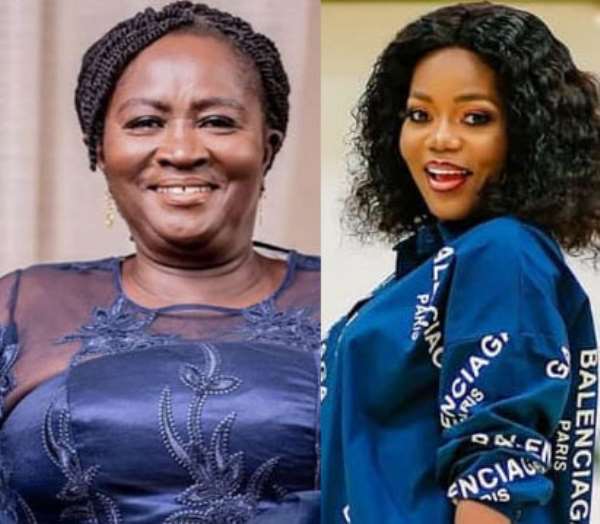 Singer Mzbel has made a shocking U-turn on her statement which linked Prof. Jane Naana Opoku-Agyeman to elders who spoke to her about her fight with Prophet Nigel Gaisie.

The vice presidential candidate for the National Democratic Congress (NDC), who has been touted for her women empowerment prowess, has since Monday come under criticism for not defending another woman's right in the case involving Mzbel and Nigel Gaisie.

This was after NEWS-ONE quoted Mzbel for querying persons who talked her out of taking on Nigel Gaise.

“I want to tell Nigel Gaise is that he does not know anything about what is happening. So he shouldn't think that he would say something to Tracey to vindicate himself because I am not done with him but it just that I have been suppressed. I am not done with him but the respect I have for some elders, especially our vice presidential candidate, the woman they picked and the elders who spoke to me so I made up my mind that I won’t mind him. But if he thinks that Tracey has gone out of control and so he will support her to say foolish stuff, as for foolish stuff it is in James Town and that is where I come from,” Mzbel said when she clearly mentioned Prof. Naana Jane's name in a 42:39 seconds video she recorded at Onua FM studio last week.

“I am disappointed in the people who believed in you. The compensation, was it you who paid? Do you have money? Were you able to compensate me? I have seen the picture you have been sending. If you are sending pictures, send all with the one you put head on my chest and wanted to push your hands into robe (nightie).”

“Those of you who spoke for this guy Nigel, you said so many things that this guy has done that you defended him. Why are you still defending this boy knowing that he is not a good person? Why?” she had asked in an earlier video.

However, she has surprisingly changed her stand this time around on what she had said earlier about Prof. Naana Jane.

In a video she shared on Facebook on Tuesday afternoon, the musician claimed that she has neither met nor even spoken to Prof. Naana before.

“I can never ever sit somewhere and say that she was the one who begged on behalf of Nigel Gaisie, it is never true, it is a lie, I swear on my womb, I have never met Prof. Naana Jane Opoku-Agyeman ever. What I said was that out of respect for her, I will not talk about Nigel Gaisie's issue again,” she said.