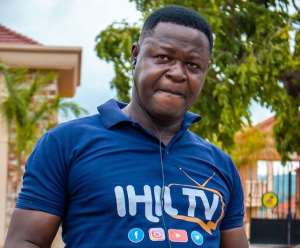 Kasapa Entertainment pundit James Clarke popularly known as Honourable Alafia of “Kasoa Trotro” fame has thrown his weight behind the call by the National Film Authority-Action Group (NFA-AG) on the government to open up cinemas to business.

The zestful actor bemoaned how the movie sector has been severely hit by the Covid 19 pandemic rendering a lot of stakeholders jobless.

“Many actors and actresses have turned into radio and tv presenters,” He stated in an interview with Eddie Ray on Kasapa Entertainment.

He believes this is happening because of inactivity due to restrictions causing many of his colleagues to diversify into other ventures to feed their respective families.

He urged the government to heed to their call and ease restrictions on the movie sector as it has been done to other sectors to save the sinking movie industry.

National Film Authority – Action Group (NFA-AG), a Creative Arts industry pressure group largely made up of film industry stakeholder associations and guilds has petitioned Government through the Ministry of Tourism, Arts and Culture to reopen cinemas in Ghana.

The petition comes after the president, Nana Addo Dankwa Akufo-Addo in his 14th address to the state declared a further easing of Covid-19 restrictions imposed by the government, stating that life can’t be permanently put on hold as the country seeks to restore some normalcy in order to revive its economy.

In his address, he stated that one of the new measures that will come into force as of August 1 is the lifting of a ban on some mosques and churches by extending the length of time people are permitted to worship to two hours.

He also allowed the re-opening of some tourist centres and open-air drinking spots and also lifted some restrictions in regard to public transport and domestic flights.

In their address, the group indicated that it has evaluated the potential spread of the virus at all cinemas across the country and the attached risk assessment shows the residual rating as safe for reopening.

The group proposed nine Covid-19 protocols which would be strictly observed by authorities and customers.

An online booking system which will allow owners of cinemas to track and trace customers easily will be provided.

NFA-Action Group thanked the Government for the stimulus packages put in place for the Creative Arts Industry.

A Petition to the Honourable Minister for the Reopening of our Cinemas.

The NFA – Action Group (NFA-AG), a Creative Arts industry pressure group largely made up of film industry stakeholder associations and guilds is calling on the Presidency through the Ministry of Tourism, Arts and Culture to immediately take action to lift restrictions on our cinemas in Ghana.

This is to enable the film industry to kickstart its process of recovery after the COVID-19 pandemic in line with many other sectors.

attached risk assessment shows the residual rating as safe for reopening. We propose an

online booking system which will allow us to track and trace our customers easily.

Our petition comes at this good time, especially after His Excellency, President Nana Addo

Dankwa Akufo Addo has lifted restrictions on a number of sectors where large groups gather such as Churches, Mosques, drinking bars and tourist sites. In addition, passenger buses have been allowed to operate at full capacity while travelling to further destination.

While making this request the NFA-AG thanks the Government for the stimulus packages put in place for the Creative Arts Industry. We believe that if the Government accepts our

petition to allow the cinemas to reopen, the industry will recover much sooner from the

impact of the pandemic. Our risk assessment report will be made public through a ZOOM

August 2020) at 4 pm. It is our utmost goal to inform and educate filmmakers and cinemas goers on the risks and how to minimise them. The report considers the full process of the cinema’s operation.

Honourable Minister, while we bring this petition to you, we would like to use this opportunity to draw your attention to some concerns of the film industry. During last year’s

Creative Arts Forum, a few of these concerns were set to be resolved by the close of the

year. To date, only the inauguration of the National Film Authority Board has been

concluded. This was done on the 20th of December, 2019 and 7 months down the road we

still feel that more could be done, ie. resourcing the National Film Authority, drafting and

laying the Legislative Instrument of Act 935 in Parliament, among other things.

The NFA-AG hereby presents this petition to the Honourable Barbara Oteng Gyasi MP. to

NFA-ACTION GROUP (NFA-AG) alongside the COVID-19 safety protocols, as stated in the attached Risk Assessment by the NFA-AG.