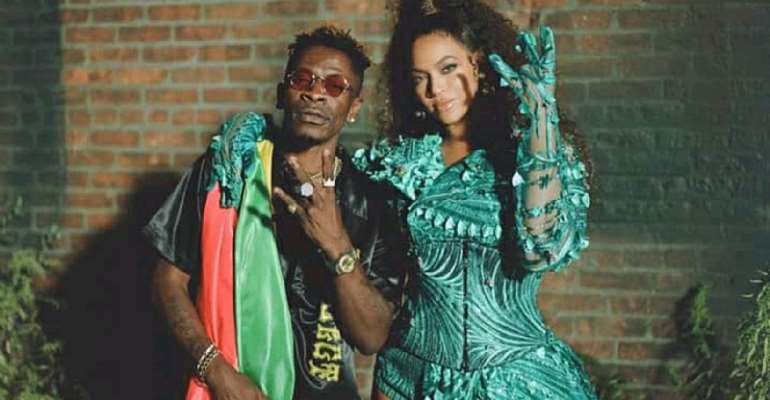 Moral lesson that can be learnt from Shatta wale and Beyonce’s collaboration is hard work and patience.

Shatta wale has indeed put Ghana on the highest level on the map for his feature on Beyonce’s lion king project.

A section of social media users were in doubt if an official video will be shot. After a section of the video was leaked some still didnt believe it was shatta wale accusing him of photoshoping the video.

Prior to the release of the official video, a snippet of the movie circulated on social media, where Beyonce was seen giving a hug to Shatta Wale which caused an uproar on social media.

Despite the hype and attention he was receiving from various celebrities in Ghana, Shatta Wale for some reasons never responded and also never posted an update about his feature with Beyonce until few hours ago.

In a post sighted by odarteyghnews.com on twitter, Charles Nii Armah Mensah aka Shatta Wale expressed his gratitude to Beyonce for giving him such a huge platform to share his talent.

Shatta Wale tweeted:
Thank you My Queen for believing in my talent and giving me a platform to share my good message to the world.. God will forever bless you.#Symbolofhope”

His message has since been applauded by his fans and friends.

Congratulations Shatta on this big win!!
See his post below;

Latest Photo Reports
Catch up with all the political quotes from our politicians.
Advertise here
More Exclusive News
ModernGhana Links
Songwriters in Ghana are not given due recognition – Music Producer
Beyonce gifts Ghanian music producer Guiltybeatz
NPP has never appreciated me for campaigning for them — Comedian Jeneral Ntatia reveals
I had no driving experience when I was first casted for 'Taxi Driver' series - Psalm Adjeteyfio reveals
I will beat you when I catch you - 3Music Boss Sadiq warns Shatta Wale in leaked voice recording
Abena Korkor says she is crushing on Pastor Mensah Otabil
I don't know if I will make it to heaven or not - KiDi
"He did the reasonable" — Arnold Asamoah Baidoo lauds Stonebwoy after he suspended UK show from clashing with Wizkid
We once walked naked, allow people to go nude in their videos - Cina Soul
TOP STORIES