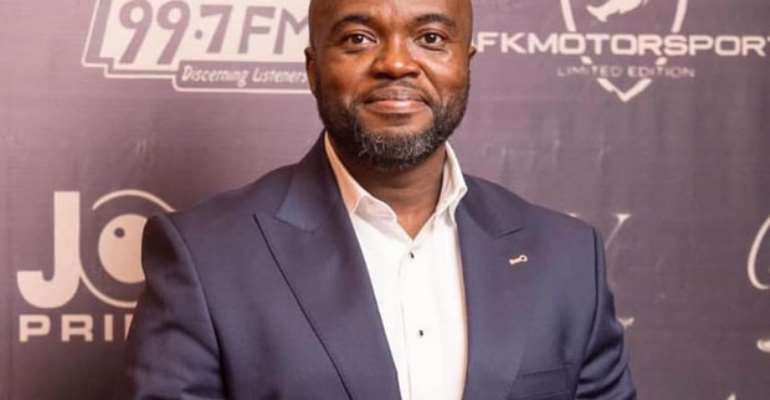 Founder of Ghana Movie Award, Fred Nuamah, says his utmost respect goes to men who defy all odds to get married to single mothers.

He tagged such men as “real men” who don't run away from their responsibilities.

“A real man is the man who dates and marries a woman with children and he accepts them as his own,” Fred said in an interview with NEWS-ONE as he applauded all single mothers in the showbiz industry for their struggles in bringing up their children.

“Any man who is interested any of these single mothers in showbiz should not be scared to go for them. They are hard working,” he added.

Fred was last in the news for allegedly kissing and cuddling another woman amid rumours that his one-year marriage to Martekor Quaye has ended.

He got married to Martekor on Saturday, March 3, 2018 at a private ceremony which was attended by some of Ghana's biggest showbiz personalities in Accra.

Their marriage came off on the heels of incessant pressure on Fred to get himself a wife because he is no longer young.

He first proposed to Martekor in January 2018 while on board an Africa World Airline from Accra to Monrovia, Liberia to attend the inauguration of the then newly elected president of Liberia, George Oppong Weah.

After that came the marriage ceremony which was witnessed by the likes of Sandra Ankobiah, Jackie Appiah, John Dumelo, Van Vicker, Omar Sheriff Captan, Becca and a host of other Ghanaian entertainers.

However, reports mid-May 2019 claimed that the marriage has hit the rock.

Both Fred and Martekor have not directly denied or confirmed the rumour about their marriage.

But Martekor has deleted all photos of him from her Instagram page. She only has one post of her and her child, which she captioned: 'Mama's boy'.

Fred, on his part, has photos of his wife on his page.