Ajeezay advises Ghanaian Comedians to work on themselves 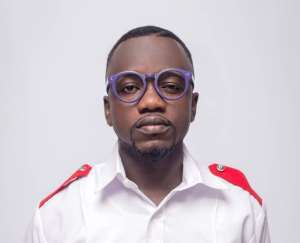 Ghana’s only Nonfa King Ajeezay who is currently in Cape Coast for his promotional tour in an interview on radio central’s drive time show with Amansan Krakye has thrown general advice to his colleagues in the comedy industry in Ghana to build upon their various brands to make the industry strong to benefit all. In conversation with the award-winning presenter, Ajeezay stressed that; if you really want to make it big and accepted into the comedy industry, you have to be unique in your presentations plus your branding which involves lots of work.

Taking himself as an example, he stated that; Looking at his brand, it is easy for people to identify him due to his style of craft and appearance which has actually helped him to establish a strong brand. He added that; the only way comedians can make lots of money is to work on their brands, educate their fans and finally when the whole of Ghana buys into your craft, that is when the enjoyment will start.

The Nonfa King also blamed few issues on what many call “The Gate Keepers” for not supporting enough to see the Ghanaian comic scene on the world map. Adding many times, such people (The Gate Keepers) tag Ghanaian comedians as not funny which isn’t the case because the Ghanaian comedian tries all he/she can including organizing their own comedy shows and more. But elsewhere like; Nigeria they are always on the top because there are people who are ready to support anytime.

Ending on that note, Ajeezay mentioned it is time the big heads in the entertainment industry start supporting the comedy industry regardless and stop the unnecessary ratings among comedians because, at the end of the day, the agenda remains the same (Promoting Ghana).

"I Appreciate Young Seidu Agongo, I Want To See Him Do Great...
42 minutes ago