United Showbiz: The Plethora Of Good And An Iota Of Not Too Good For The Teacher Kwadwo Brand 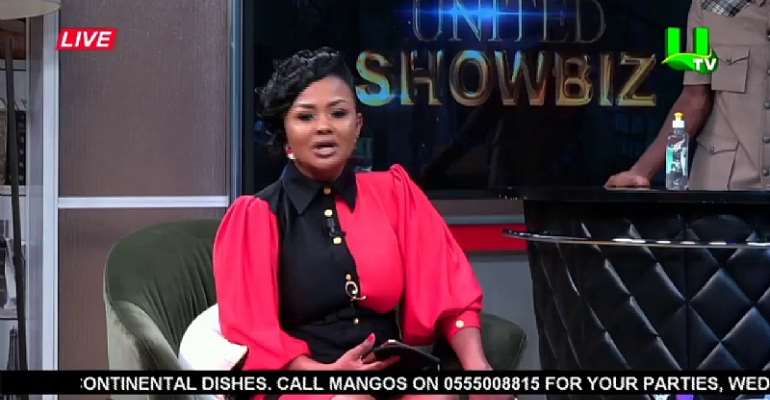 It is axiomatic that UTV’s United Showbiz programme hosted by Nana Ama McBrown has a unique way of never disappointing Ghanaian entertainment lovers by providing the glue to keep people at their TV sets and UTV pages and groups on Facebook.

The hostess, an experienced entertainer, together with the outstanding veteran producer and production team, has a unique way of carefully selecting guests to enhance showbiz in Ghana as well as sort out deficiencies in the country’s entertainment industry which has been moving at the pace of a tortoise, comparatively. Shows like United Showbiz is one of the immediate catalyst to propel Ghana’s entertainment industry to the top, a lonely place Ghana should have been together with Nigeria for the past two decades.

No one requires the paid services of a soothsayer to prophesy that the continued good works of Fada Dickson and the host are in the right direction to bringing out the best value for entertainers in terms of increase in publicity and revenue, an opportunity to clarify controversies, reasons associated with prevailing beefs as well as settling them amicably.

The most laudable thing happened over the weekend on the show when a herculean effort was put in place to invite and settle the beef between two of Ghana’s experienced actors notable for comedy. The beef between Kwadwo Nkansah and Benson Nana Yaw Oduro Boateng, popularly known as Lil Win and Funny Face respectively, was the dirtiest and most relations-involving Ghanaians have ever observed and recorded memorably in the entertainment industry.

A little over the past two decades, Ghanaians have witnessed movie-related beefs and musical beefs, though a few are just sugarcoated rumours. However, none comes close to the stench that emanated from the laundry of these two young entertainers. The cause of it was just because of one award category—Favourite Actor— at the Ghana Movie Awards. On a frivolous note, the publicity generated from the award made it the most talked about and most relevant award in the country at that time. To the ordinary Ghanaian ensconcing themselves on social media, the hype at that time surpassed what the Oscars or Academy awards have always held traditionally. As predictable, both feuding actors could not control themselves at the greater part of the show which almost birthed the exchange of punches on live television. The intentional breaks from the producers to calm nerves was clouded by resentful emotions unearthed from volcanoes of anger the two actors exuded towards each other.

In as much as the actors had tried their possible best to chip in some comic relief later, the pretentious frivolity was not enough remedy to immediately put the show back on its track. As admitted by the multitalented host, she almost lost control of a show for the first time in her newly found career as a TV presenter. The long awaited desire of the Ghanaian entertainment lovers was finally satiated as the two comedians patched things up. After screaming at each other and breaking all current social distancing protocols on the show, there was a sudden change of events as the two actors put aside differences and hugged each other to extinguish their beef.

It could be recalled months before this episode that Ghanaians earlier commended the host together with the production team and co-guests for affording a similar opportunity for not too veteran musicians, Sister Afia and Freda Rhymes, to put their differences aside and unite after a chronology of social media tirade.

For you guess to be as good as mine, could you imagine the beautiful end results if this duplicate opportunity is given Sister Debbie and Fela Makafui?

This same entertainment show has been affording a platform for one part of a feuding party to clarify controversial issues by giving viewers an unheard part of the stories. For instance in the absence of other celebrities in question, Shatta Wale who appeared on the show weeks ago was made to expatiate his reasons for calling other celebrities especially Reggie Rockstone poor. To him, this is to bait government to help the music industry due to the paucity of unity among artistes.

Subsequently, since feuding parties who were once associated with his Bhim Nation label were not present, Stoneboy hinted that a lawsuit had been his only remedy to settle issues concerning the Kelvin Boy-Blackk Cedi brouhaha. Unfortunately, the Father’s Day edition garroted Reggie Rockstone’s opportunity to talk about the impending beef between Shatta Wale and himself. His option for not have commented could have been the brainchild of respect for the other elderly guests including Shatta Capo, Shatta Wale’s father.

However, making Teacher Kwadwo appear on the show to perform his prerecorded videos a la “dialogical TikTok” might be doing more harm than good to not only himself but also the overall beauty of the show. It seems like a forced publicity which may culminate in killing his budding brand. The best description for this is like a broke guy getting in the hearts of a slay queen without money: good character and love alone are not enough.

It is like telling the same jokes a million times, at the same place, to the same audience at the same time, and expecting people to still LOL. A short segment for his video without Teacher Kwadwo personally appearing to explain the video will help a lot. I have so much love and respect for the young man for oodles of things he has achieved, particularly those that benefit schoolchildren of deprived communities. It doesn’t mean a deliberate overlooking of his impending brand suicide. Hence I have nothing but to paraphrase Stephanie Benson’s popular social media mantra— take it or leave it, I have said it.