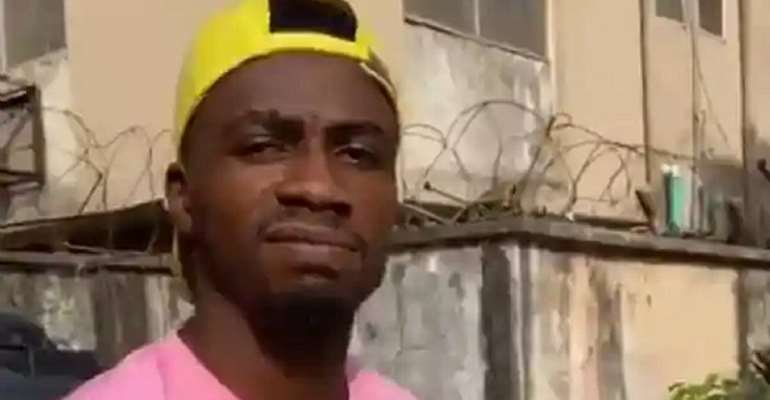 Josh Alfred, a Nigerian comedian popularly known as Josh2funny, is on cloud nine. Videos answering his “don’t leave me” challenge, inspired by a breakthrough skit where he punned around with the word “leaf”, have electrified social media and gone viral around the world.

“Comedy is my life, it’s what I love,” the 29-year-old said. “Seeing my videos being shared and people all over the world doing their versions, it’s incredible.”

Alfred is one of a flourishing generation of comedians in Africa’s most populous country that have gained widespread popularity, largely through skits posted online.

His turn in the spotlight began on 24 March, when he posted a skit on Instagram from his home in Lagos. Egged on by his “hypeman” Bello Khabir, he played around with the word “leaf”.

“Can’t you see, I’m on leave?” he says in one section, standing on two leaves.

It gathered a life of its own months later after it was parodied in Zimbabwe. Alfred shared the parody to his 1.5 million Instagram followers, other versions began to gather more and more views, and then in June it exploded.

Videos of the challenge have been viewed more than 6m times on his own Instagram page. Videos on TikTok have gained more than 2bn views.

Creating new skits, dragging out puns, and using easy props is infectious, Alfred said. “I feel like once you start trying to find new ones, it becomes a constant thing. That’s what gets people into it.”

In another video he rolls a picture of an ex-girlfriend around his wrist, calling it a Rolex watch. In others, his puns echo a faux-wisdom typical of Nollywood comedy sketches. “You have to say it like you believe you’ve said something very deep,” he said.

Alfred studied photography at university but church events gave his naturally comic personality a platform to pursue his dream.

“I started by doing comedy in my church around 2011, then different church functions,” he said. “I was getting more popular. After a while it made me think, ‘OK this is what I really want to do.’”

In 2015 he committed to comedy and performance art full-time. He adopts more than seven different personalities in comedy sketches performed in stand-up shows and in functions, which are his main source of income, as well as social media. Videos online do not directly generate much revenue aside from adverts, but are vital to generating popularity.

Other sketches have gradually brought him fame but the “don’t leave me” challenge is the first to attract global attention. The experience, though thrilling, has been double-edged. “It is a bittersweet experience actually in the sense that when it’s going viral, you love to see that your work travels far, but you don’t necessarily get the credit for it,” he said.

Issues surrounding the lack of recognition for creators of viral entertainment on social media have grown more acute in recent years. A dance called Renegade, created by 14-year-old Jalaiah Harmon, a black girl in Atlanta, became popularised by celebrities and TikTok stars, attracting millions of views. Criticism followed by a push to celebrate Harmon for the dance she choreographed saw her invited to perform at major events, amid greater consciousness around the erasure of online creators and questions on who benefits from their talent.

Many of Alfred’s supporters have tried to highlight his role in the challenge, he said. An instrumental version of his “don’t leave me” song can be freely downloaded on his website, helping to direct attention back to him.

“People see us in a very casual way, like we’re just playing around on the net. It gets to me actually because I’ve spent time thinking and studying internet comedy,” Alfred said. “Attention is important for us. I believe we creators should be given more respect for the joy we give others.”

Easily accessible online comedy is a precious reprieve for millions of people, particularly during a pandemic, Alfred said. “It is such a hard time around the world that I think comedy has benefited. People need to laugh and forget what is going on.”