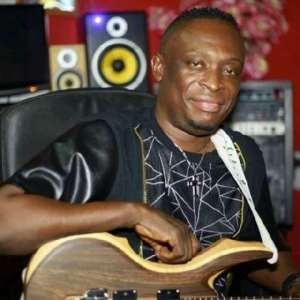 George Owusu Forest, the son of the late legendary Ghanaian sound engineer George Forest, has revealed that all the promises some pastors and gospel musicians made at his father's funeral is yet to be fulfilled.

According to the fourth child of George Forest, out of ten promises at his Dad's funeral, only two are in. I believe there are some on the way coming. He added that all those who promised at the funeral can still bring them as their doors are opened to them.

Speaking to Busumuru Sean Kingston Junior Forest said his father should have given all awards he was nominated when he was alive.

When asked about what he missed about his late father, he said;

My father used to tell me to come to the studio and learn. Papa sees me happy when I am doing something about music

George Forest left behind ten children.
George Owsus Forest succeeded his father and now use Junior Forest as his signature in music.

He called on all gospel artistes to bring their works to him for quality sound.

Latest Photo Reports
Catch up with all the political quotes from our politicians.
Advertise here
More Interviews
ModernGhana Links
Stop stealing songs – Songwriter to 'lazy' musicians
I Want To Use Music To Connect To My Fatherland — Fadu
Vodafone Ghana Music Awards 2021: Diana Hamilton Grabs 6 Nominations
Ladies are not Ready to Build with any Man...Flora Jacobs
Salma Mumin Debunks Rumour That She Removed Her Butt
WATCH: Travel the world amidst COVID-19 with Jynna Asiedu-Ofei and her Borga Diaries
Teni: Humanity Over "The Industry"
We Had Sex In A VIP Bus---Fameye Recalls Regrettable Experience
Bosom P-Yung Appeals For Funds
TOP STORIES