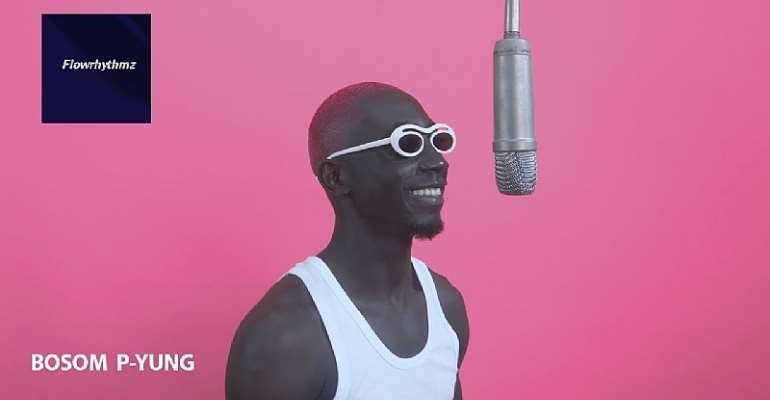 'Attaa Adwoa' hitmaker, Bosom P-Yung has revealed his eagerness to continue doing his best to keep his followers and admirers entertained whilst ignoring his doubters to continue hating.

Most people waste a lot of time trying to do their best to prove those who doubt them wrong but Bosom P-Yung said he will rather concentrate on those who believe in his creativity.

In a chit chat with Cape Coast's finest radio presenter, Amansan Krakye on GBC Radio Central, Bosom P-Yung was asked what he thinks about those who suggest that he'll fade away very soon in the game.

He responded "No I feel that I shouldn't prove anybody wrong. I should rather focus on the people loving it and do more for them. I have never made up my mind to prove my doubters and haters wrong.

"I was basically going hard to do more for those who appreciate my creativity but I wasn't bothered about those who want to bring me down or think that my style will fade away very soon".

Bosom P-Yung continues to blossom in the music scene with many artistes featuring him on songs such as 'emergency', 'yaazo' ,'asa bone', 'dw3 rmx' amongst other songs.

Latest Photo Reports
Catch up with all the political quotes from our politicians.
Advertise here
More Interviews
ModernGhana Links
Vodafone Ghana Music Awards 2021: Diana Hamilton Grabs 6 Nominations
Ladies are not Ready to Build with any Man...Flora Jacobs
Salma Mumin Debunks Rumour That She Removed Her Butt
WATCH: Travel the world amidst COVID-19 with Jynna Asiedu-Ofei and her Borga Diaries
Teni: Humanity Over "The Industry"
We Had Sex In A VIP Bus---Fameye Recalls Regrettable Experience
All Those Who Made Promises At My Father's Funeral Have Not Fulfilled Even One--Late George Forest Son
Bosom P-Yung Appeals For Funds
I Worked As A Secretary To Esther Smith---Kumawood Actress Oduma
TOP STORIES